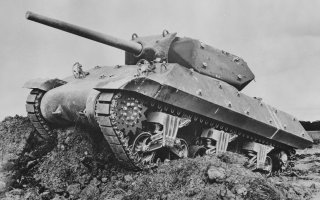 Here's What You Need to Know: The United States’ M10 Tank Destroyer was one of the more potent anti-tank weapons of World War II.

At the outset of World War II, American anti-tank doctrine was built around countering Germany’s Blitzkrieg tactics. While tank units were to take out any German tanks they came across in combat, dedicated tank destroyer units were tasked with preventing German armor from punching through American lines.

Tank destroyer design emphasized speed and gun size over armor protection. Rather than hunting down enemy armor, American tank destroyers were typically held in reserve, then rushed to wherever enemy armor was concentrated, or hidden in defensive positions where enemy armor was anticipated.

The M10’s main gun was a 3-inch gun originally developed for use in an anti-aircraft role and could use a variety of ammunition, including a high-explosive shell for use against static positions, as well as armor-piercing shells. In addition, a .50 caliber heavy machine gun was mounted at the rear of the open topped turret. To operate the gun, one crew member would stand behind the turret on the tank’s hull (in a decidedly exposed position!) and fire across the open top.

Armor protection was scanty, however. Though based on the M4 Sherman tank design, the M10 had thinner armor in an effort to keep weight down, which was steeply sloped in order to partially offset the limited protection thin plating offered.

The M10’s turret was also steeply sloped, but unlike virtually all other tank designs, the turret was open topped. While this allowed the commander excellent visibility and facilitated communication with dismounted infantry, it also left the M10 vulnerable in both urban and woodland environments.

When fighting in tight city streets, the open top turret was particularly vulnerable to grenades dropped from balconies and rooftops and offered limited protection from snipers. Conversely, the turret was also vulnerable to artillery and mortar shrapnel that hit trees in forested areas, as well as low angle anti-aircraft air bursts.

On the other hand, tank evacuation was much faster than in tanks with turret hatches, and the hand-cranked turret’s slow rotation speed was partly offset by the platform’s relatively powerful drivetrain and speed.

Though the M10 had serious armor protection deficiencies, especially in the later stages of the war, it proved itself as a useful platform in both anti-tank operations and in support of infantry. In the latter role, its large 3-inch gun was used to devastating effect against enemy bunkers and dug-in infantry. Thanks to the Lend-Lease Act, the M10 was supplied to Free French Forces as well as to the British. Small numbers of tanks were even exported to the Soviet Union. After the war, surplus tanks were also given to allied countries.

Eventually the M10 was superseded by the up-gunned M36. All in all, the M10 did its job well and was more or less well liked by the allies.