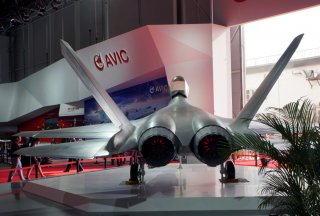 Here’s What You Need to Remember: China does not have an equivalent to the F-35B fighter jet. In fact, China doesn’t have a fifth-generation vertical takeoff and landing stealth fighter at all. But also, the country operates fewer aircraft carriers than the United States and has yet to produce large numbers of that type of aircraft.

China’s new carrier-launched, fifth-generation stealth fighter jet, the Shenyang FC-31, has made its maiden flight, according to the Chinese-backed Global Times.

The newspaper published photos purportedly to show the FC-31 flying, “painted with blue-green primer,” and configured with twin canted tail fins, twin engines and a “high-mounted cockpit.” The aircraft was reportedly a carrier-launched variant because the aircraft was described by the paper as having a launch bar and a wing-fold mechanism for carrier operations.

“Other notable features are a chin-mounted sensor turret, apparently analogous to the F-35s Electro-Optical Targeting System, and what seems to be a remodeled cockpit canopy profile,” according to the Global Times. The Chinese newspaper says the carrier-launched version of the FC-31 has so many upgrades that it is practically a “new aircraft.”

There are several variables to consider regardless of how well the FC-31 may or may not compare against the U.S. Navy’s F-35C. China does not have an equivalent to the F-35B fighter jet. In fact, China doesn’t have a fifth-generation vertical takeoff and landing stealth fighter at all. But also, the country operates fewer aircraft carriers than the United States and has yet to produce large numbers of that type of aircraft.

China’s industrial capacity for shipbuilding and aircraft construction is superior to that of other countries. So, it might not take as long as expected for China to operate four or five aircraft carriers and large numbers of the FC-31 carrier variant. China has already conducted dual-carrier options in the South China Sea region in what appears to be a transparent effort to rival coordinated U.S. dual-carrier attack preparation drills.

This is where the F-35B fighter jet enters the picture. The U.S. Navy’s USS America amphibious assault ship and others like it could deploy with as many as twelve or thirteen F-35B fighter jets. That means there won’t be enough of China’s nascent FC-31 to counter the Navy’s ready and deployable various variants of the F-35 fighter jet. Also, there is an expeditionary component. After all, amphibious assault ships can be more agile than a large aircraft carrier or carrier strike group. These ships could provide air support for amphibious assaults and project power in otherwise difficult-to-reach areas. The FC-31 does not appear to have vertical take-off and land capability. Thus, it is reliant upon China’s aircraft carrier runways.