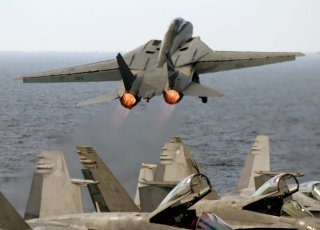 Here's What You Need to Know: The F-14 Tomcat was designed to incorporate the air combat lessons learned from the poor service record of the F-4 Phantom II during the Vietnam War years, particularly against the fighters in the formidable Soviet MiG catalog.

The Tomcat has its early roots in the Tactical Fighter Experimental (TFX) program. Seeking to cut development costs and to streamline production chains, then-Secretary of Defense Robert McNamara laid plans to procure a joint fighter for the U.S. Air Force and Navy. Against the wishes of the Navy, the TFX program produced the ill-fated General Dynamics F-111B attack aircraft, a long-range interceptor plagued by excessive weight and landing mechanism problems. The F-111B project was cut short by 1968 and the Navy was given the green light to develop a two-seat, twin-engine air superiority fighter better suited to its mission parameters.

The first of the prolific “teen series” fighters that also included the F-15 Eagle, F-16 Fighting Falcon, and F/A-18 Hornet fighter jets, the F-14 Tomcat was designed to incorporate the air combat lessons learned from the poor service record of the F-4 Phantom II during the Vietnam War years, particularly against the fighters in the formidable Soviet MiG catalog (and to more effectively engage Soviet bombers like the Tu-22). As noted in a deeply insightful 2014 lecture by Northrop Grumman VP Mike Ciminera, the uphill struggles of the TFX program were not completely for naught—the F-111's many design deficiencies provided crucial engineering experience that helped mold the Tomcat into the well-rounded naval aviation fighter that it proved itself to be over its three decades of service.

The F-14 Tomcat was first deployed in 1974 aboard the USS Enterprise aircraft carrier, as part of the U.S. withdrawal from Saigon. The fighter featured a host of improvements over its F-4 predecessor, including an integrated M61 Vulcan cannon for additional flexibility in dogfights. At top speeds approaching Mach 2.4, the Tomcat could capably fulfill the Navy’s requirement for a fast-flying interceptor; it was also markedly more agile than the F-4, which, despite its massively powerful J79 twin engines, was not known for its stellar aerodynamic performance.

The F-14's versatile armament suite, spread across ten hardpoints, allowed it to perform both long-range interception and air superiority missions. The fighter's potent AN/AWG-9 radar complements its long-range Phoenix AIM-54A missiles, giving it the ability to threaten high-value aerial targets at a range over 100 miles. Meanwhile, its AIM-7 and AIM-9 medium and short-range missile loadout made it well-suited for an attack escort role.

The Tomcat drew its first blood during the Gulf of Sidra incident, in which two F-14's destroyed two Sukhoi Su-22s belonging to the Libyan Air Force. The F-14 continued to see regular use throughout the 1990s and 2000s as a strike escort, and reconnaissance and surveillance platform, taking part in Operation Desert Storm, the NATO bombing campaign against Yugoslavia, and the Iraq War. But the title of all-time most successful F-14 pilot goes to Iranian ace of aces Jalil Zandi, who is credited with downing as many as 11 Iraqi aircraft during the 1980-1988 Iran-Iraq War.

The F-14B revision, introduced in 1987, brought an updated engine and partially enhanced avionics. The final F-14 variant, the F-14D, incorporated a glass cockpit as well as a slew of new and updated electronic warfare and targeting systems.

Upwards of seven hundred F-14 models were produced through the early 1990s. The Tomcat was formally retired in 2006 following a final strike mission over Iraq, capping off the career of one of the most iconic fighters in U.S. naval aviation history.