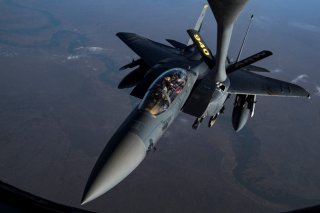 Here's What You Need to Remember: The F-16XL was pitched as faster, lighter, and able to carry more, but it largely failed due to an even more sophisticated F-15E.

In 1977, after the successful sale of the F-16 “Fighting Falcon” to the Air Force, U.S. defense contractor General Dynamics launched a project intended as a technology demonstrator. This project, the “Supersonic Cruise and Maneuver Prototype” (SCAMP), was not intended to rival any existing Air Force jets, and General Dynamics had not planned to sell it.

Instead, the aircraft’s purpose was to demonstrate that “supersonic cruising”—the notion of using a plane’s afterburners to achieve supersonic speed, then being able to cruise at that speed without the need for further use of the afterburners—could be used in military aircraft. That technology was already present on the Concorde jet, which had entered service in 1976 and regularly flew service at supersonic speed across the Atlantic. The Concorde, though, would never have succeeded as a military jet - its larger wings lacked the maneuverability of the smaller wings used on the F-17 at the time.

The SCAMP’s design effectively sought to capture the best of both worlds. Its larger wings generated more lift than existing military aircraft, allowing it to maintain higher speeds using less fuel. The new wing - designed in part by Harry Hillaker, the mastermind behind the original F-16 design—was extensively tested in General Dynamics wind tunnels; the final product ultimately offered double the surface area of the original F-16 wing, without any increase in drag. As a downside, the wing’s design lacked hard points to attach bombs or missiles, substantially decreasing its versatility.

Still, the Air Force was impressed enough when shown the new plane design that it provided Hillaker and General Dynamics with two F-16 airframes. The two planes that were furnished were dubbed “F-16XLs,” and modifications to the wing design allowed for hard points to be attached—all while maintaining the plane’s ability to carry twice the fuel of the original F-16. Another design update incorporated carbon fiber into the wings, helping to shave off six hundred pounds of weight.

Ultimately, though, when the F-16XL was pitted against the F-15E, a modified version of the F-15 Eagle, the Air Force chose the latter over the former. The F-15E enjoyed many of the F-16XL’s advantages, and brought its own; it was slightly faster at Mach 2.5, could fly higher, and, crucially, boasted two engines instead of one - a crucial advantage for an aircraft intended for missions in enemy territory, as the aircraft with two engines could limp home if one was damaged, while the aircraft with one could not.

The F-15E remains in service and has most recently been used in combat operations against the Islamic State (ISIS). The two F-16XL prototypes, meanwhile, remain in retirement at Edwards Air Force Base in California.