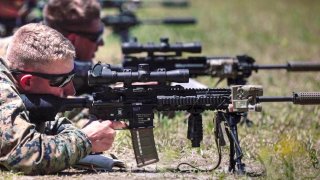 It is a term that has been made infamous by movies and certainly video games: “sniper.” It is that lone individual who is an excellent shot, made all the better by an ultra-powerful “sniper rifle” with a large scope. However, the reality is vastly different from fiction.

It remains unclear who actually coined the term “snipers” but it likely came from “snipe shooting.” One story tells that the snipe is a small, fast-flying game bird found in the marshes of England and Scotland. It is known for its agility and twisted flight, each of which makes it very difficult to shoot. In the era of flintlock fowling guns, it was considered quite an accomplishment to bring down the snipe.

Another story tells that this bird was hunted in British-controlled India during the 18th, where the concept of “sniper” was used to describe someone who was described as a skillful hunter with the ability to stalk and be a first-rate shot.

Either way, the idea of “sniper” was born.

The true sniper only arrived on the battlefield with the advent of rifling—the cutting of spiral grooves into the inside of a barrel. This imparted spin to the projectile and increased accuracy. It was clearly a superior weapon to smoothbore muskets of the seventeenth and eighteenth centuries.

It came at a disadvantage to these early “riflemen” serving in the militaries of Europe however. While a skilled soldier could load and fire three to four rounds per minute with a musket the rifle was far slower to reload. This meant soldiers had to pick their targets carefully because it would be a long time to get another chance.

Adrian Gilbert, author of Sniper: The World of Combat Sniping¸wrote, “The introduction of greased paper wrapped round the ball made the process faster, but the difficulties of muzzleloading were never satisfactorily overcome until the arrival of the Minié bullet in the mid-nineteenth century.”

Even before there were actual “snipers” on the battlefield there were “sharpshooters,” and these men came to prominence during the American Revolution (1775–83). The Americans were armed with Kentucky or Pennsylvania rifles—both slender, long-barreled, small caliber flintlocks; while many of those who took up arms were experienced shots, having learned to fire a gun as children.

These American rifles had a practical range of some 300 yards, compared to the British muskets, which were effective at 200 yards. Moreover, the style of combat greatly differed as well.

The Americans, in part due to their smaller numbers, used cover and actually tried to “take out” enemy officers—whereas the British continued to fight in the typical ranks in the open and were much more “sporting” when it came to shooting at the enemy. Peglar noted in his book that “On one occasion George Washington appeared within range of a British rifleman, who was instructed not to shoot, as it was not the business of common soldiers to target their social betters.”

Another story has been told that a British rifleman asked the Duke of Wellington on the morning of the Battle of Waterloo in 1815 if he “could have a go at Napoleon.” Again the answer was absolutely not. Sniping was not part of the British way of doing things—at least not at the time.

That changed dramatically in the century that followed after the Napoleonic Wars. British adventures around the world showed the benefits of using every tool at their disposal when confronting the enemy. The machine gun was used against tribal enemies, but sniping came into its own when the professional British Army faced the Boers in the Second Anglo-Boer War (1899–1902).

The Americans continued to appreciate the role that sharpshooters could play, and during the Civil War, the Union Army formed the 1st Regiment of Sharpshooters under the command of Colonel Hiram Berdan. Each man in the unit had to pass a rigid shooting test before being accepted. The Confederates too had their own specialized sharpshooter units, proving that military leaders saw a need for skilled shooters who could take down a target from a great distance.

It wasn’t just that the military saw the effectiveness of sharpshooters.

During this time rifle development continued, and the preferred weapon of marksmen evolved from a slow muzzleloading rifle to a quick-firing bolt action rifle. The other advent that came about in this era was the optical sight that could make a sharpshooter an even better shot!

The first optical scopes were used in hunting rifles before the military issued actual “sniper rifles.”

Snipers in the Trenches

While sharpshooters had become a crucial part of the military in the nineteenth century, the sniper truly joined the ranks during the First World War. It is easy to think about the role that the machine gun and artillery barrages played during the war and how these weapons resulted in the horrific trench warfare, but it was during this time that the role of the sniper truly evolved.

As the lines became static each side looked at ways to not only breakthrough but also to harass the enemy, and here is where snipers had a very valid role to play. The Germans had an early upper hand.

Peglar noted that “One British sniper officer reckoned that exposing any part of the body for more than three seconds would result in a shot from a German sniper, and they had no shortage of targets.” Those new to the trenches simply couldn't understand how deadly a sniper was, and Peglar cites a report that in 1915 on any given day a single battalion in a quiet sector could lose twelve to eighteen men to German snipers.

The British soon responded by training men to be snipers. However, as noted sniping is far more than just picking up a rifle with a scope on it. The British military planners found that many good target shooters were not up to the task. While these men could shoot to kill, they weren’t up to the task of stalking and being patient—skills and mentality necessary to being a true sniper.

The most successful British snipers during the war were small game hunters, gamekeepers, and deer-stalkers. The best snipers were also found in the Commonwealth ranks with men coming from the more rugged lands of Canada, Australia, and South Africa.

The issue of whether a sniper was a “coward” is one for extended conjecture.

Gilbert also noted, “The moral repugnance felt in striking down a soldier in cold blood stayed some men’s hands, but such feelings were alien to the true sniper.”

There was also the fact that snipers were typically despised by the enemy and seldom respected. Gilbert also wrote, “That over-accurate German sniping would have brought retaliatory British artillery fire,” and he added, “For the determined sniper, the prospect of enemy retaliation and the curses of one’s comrades were overridden by the thrill of the hunt.”

The Sniper Since World War I

As the first truly modern war the First World War resulted in a rapid advance in military technology that included the adoption of the tank, aircraft, body armor including use of helmets. The role of the sniper was also better understood—even if it created many of those aforementioned myths.

Today the true sniper is specially trained which often involves working as part of a team. Whether alone or with a spotter the sniper is often isolated and in a constant state of danger from the enemy; snipers are seldom allowed to surrender so instead of being cowards—as Michael Moore has likened snipers to be—these are men (and women) who should be seen as brave for the role they have chosen to play.

Some may think that snipers don’t play fair. They often have chosen targets in quiet areas, but the point of the sniper is not to cause the most casualties but rather to affect the morale of the troops. If one can’t feel safe behind the lines then they can’t feel safe anywhere—and for that reason, the sniper continues to play an important role on the modern battlefield.

Over the years the weapons and other technology provided to the sniper has increased as well.

As Peglar wrote in concluding his book, “the amount of research and development time being devoted to (sniper weapons) is perhaps a sign that sniping has finally been recognized as a necessary and vital battlefield function. One thing is certain: that on the battlefield of the future it will not be possible to hide from the sniper.”