How Pandemics Past and Present Fuel the Rise of Mega-Corporations 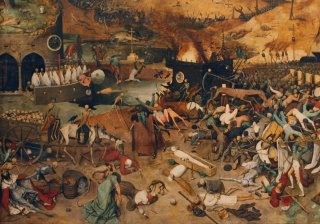 In June 1348, people in England began reporting mysterious symptoms. They started off as mild and vague: headaches, aches, and nausea. This was followed by painful black lumps, or buboes, growing in the armpits and groin, which gave the disease its name: bubonic plague. The last stage was a high fever, and then death.

Originating in Central Asia, soldiers and caravans had brought bubonic plague – Yersina pestis, a bacterium carried on fleas that lived on rats – to ports on the Black Sea. The highly commercialised world of the Mediterranean ensured the plague’s swift transfer on merchant ships to Italy, and then across Europe. The Black Death killed between a third and a half of the population of Europe and the Near East.

This huge number of deaths was accompanied by general economic devastation. With a third of the workforce dead, the crops could not be harvested and communities fell apart. One in ten villages in England (and in Tuscany and other regions) were lost and never re-founded. Houses fell into the ground and were covered by grass and earth, leaving only the church behind. If you ever see a church or chapel all alone in a field, you are probably looking at the last remains of one of Europe’s lost villages.

The traumatic experience of the Black Death, which killed perhaps 80% of those who caught it, drove many people to write in an attempt to make sense of what they had lived through. In Aberdeen, John of Fordun, a Scottish chronicler, recorded that:

This sickness befell people everywhere, but especially the middling and lower classes, rarely the great. It generated such horror that children did not dare to visit their dying parents, nor parents their children, but fled for fear of contagion as if from leprosy or a serpent.

These lines could almost have been written today.

Although the death rate from COVID-19 is far lower than that of the Black Death, the economic fallout has been severe due to the globalised, highly-integrated nature of modern economies. Add to this our highly mobile populations today and coronavirus, unlike the plague, has spread across the globe in a matter of months, not years.

While the Black Death resulted in short term economic damage, the longer-term consequences were less obvious. Before the plague erupted, several centuries of population growth had produced a labour surplus, which was abruptly replaced with a labour shortage when many serfs and free peasants died. Historians have argued that this labour shortage allowed those peasants that survived the pandemic to demand better pay or to seek employment elsewhere. Despite government resistance, serfdom and the feudal system itself were ultimately eroded.

But another less often remarked consequence of the Black Death was the rise of wealthy entrepreneurs and business-government links. Although the Black Death caused short-term losses for Europe’s largest companies, in the long term, they concentrated their assets and gained a greater share of the market and influence with governments. This has strong parallels with the current situation in many countries across the world. While small companies rely upon government support to prevent them collapsing, many others – mainly the much larger ones involved in home delivery – are profiting handsomely from the new trading conditions.

The mid-14th century economy is too removed from the size, speed, and interconnectedness of the modern market to give exact comparisons. But we can certainly see parallels with the way that the Black Death strengthened the power of the state and accelerated the domination of key markets by a handful of mega-corporations.

The sudden loss of at least a third of Europe’s population didn’t lead to an even redistribution of wealth for everyone else. Instead, people responded to the devastation by keeping money within the family. Wills became highly specific and wealthy businessmen, in particular, went to great lengths to ensure that their patrimony was no longer divided up after death, replacing the previous tendency to leave a third of all their resources to charity. Their descendants benefited from a continued concentration of capital into a smaller and smaller number of hands.

At the same time, the decline of feudalism and the rise of a wage-based economy following peasant demands for better labour conditions benefited urban elites. Being paid in cash, rather than in kind (in the granting of privileges such as the right to collect firewood), meant that peasants had more money to spend in towns.

This concentration of wealth greatly accelerated a pre-existing trend: the emergence of merchant entrepreneurs who combined trade in goods with their production on a scale only available to those with significant sums of capital. For example, silk, once imported from Asia and Byzantium, was now being produced in Europe. Wealthy Italian merchants began to open silk and cloth workshops.

These entrepreneurs were uniquely positioned to respond to the sudden labour shortage caused by the Black Death. Unlike independent weavers, who lacked the capital, and unlike aristocrats, whose wealth was locked up in land, urban entrepreneurs were able to use their liquid capital to invest in new technologies, compensating for the loss of workers with machines.

In southern Germany, which became one of Europe’s most commercialised areas in the late 14th and 15th centuries, companies such as the Welser (which later ran Venezuela as a private colony) combined growing flax with owning the looms on which workers span that flax into linen cloth, which the Welser then sold. The trend of the post-Black Death 14th and 15th centuries was a concentration of resources – capital, skills, and infrastructure – into the hands of a small number of corporations.

The age of Amazon

Rolling forward to the present, there are some clear similarities. Certain large organisations have stepped up to the opportunities provided by COVID-19. In many countries across the world, entire ecologies of small restaurants, pubs and shops have suddenly been closed down. The market for food, general retail and entertainment has gone online, and cash has pretty much disappeared.

The percentage of calories that restaurants provided has had to be rerouted through supermarkets, and much of this supply has now been taken up by supermarket chains. They have plenty of large properties and lots of staff, with the HR capacity to recruit more rapidly, and there are many underemployed people who now want jobs. They also have warehouses, trucks and complex logistics capacity.

The other big winner has been the giants of online retail – such as Amazon, who run a “Prime Pantry” service in the US, India and many European countries. High street shops have been suffering from price and convenience competition from the internet for years, and bankruptcies are regular news. Now, much “non-essential” retail space is closed, and our desires have been re-rerouted through Amazon, eBay, Argos, Screwfix and others. There has been a clear spike in online shopping, and retail analysts are wondering whether this is a decisive move into the virtual world, and the further dominance of big corporations.

Keeping us distracted as we wait at home for our parcels is the streaming entertainment industry – a market sector which is dominated by big corporations including Netflix, Amazon Prime (again), Disney and and others. Other online giants such as Google (which owns YouTube), Facebook (which owns Instagram) and Twitter provide the other platforms that dominate online traffic.

The final link in the chain is the delivery companies themselves: UPS, FedEx, Amazon Logistics (again), as well as food delivery from Just Eat and Deliveroo. Through their business models are different, their platforms now dominate the movements of products of all kinds, whether your new Toshiba branded Amazon Fire TV, or your stuffed crust from Pizza Hut (a subsidiary of Yum! Brands, which also owns KFC, Taco Bell and others).

The other swing to corporate dominance has been the move away from state-backed cash towards contactless payment services. It’s obviously a corollary of online marketplaces, but also means that the money moves though big corporations that take their slice for moving it. Visa and Mastercard are the largest players, but Apple Pay, PayPal, and Amazon Pay (again) have all seen increases in their transaction volume as cash sits unused in people’s purses. And if cash is still imagined to be a vector for transmission, then retailers won’t take it and customers won’t use it.

Small business has taken a really decisive hit across a wide range of sectors as COVID-19, like the Black Death, results in big companies gaining market share. Even those working at home to write pieces like this are working on Skype (owned by Microsoft), Zoom and BlueJeans, as well using email clients and laptops made by a small number of global organisations. Billionaires are getting richer while ordinary people lose their jobs. Jeff Bezos, Amazon’s CEO, has increased his wealth by US$25 billion since the start of the year.

But this is not the whole story. The other big trend in the response to the virus has been the strengthening of the power of the state.