How the Russian Air Force Can Fight Anyone 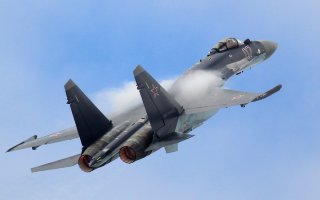 The head of the Russian Knights Aerobatic Group, a demonstration team of the Russian Air Force, marked the thirtieth anniversary of the formation of the group this week to highlight the advanced aerodynamics of the Sukhoi Su-30SM and Su-35 fighters. Each of those aircraft's development came out of the Su-27, which was the fighter originally used by the Russian Knights before the aerobatic demonstration team adopted the Su-30SM in 2016.

The group has also used the highly formidable Su-35 fighter since November 2019.

"What was considered as a critical mode for an aircraft when it could not be controlled is now quite a controllable regime," explained Shcheglov. "Earlier, a tailspin was something beyond something permissible whereas today it is quite a correct maneuver. The planes are very good, offer vast capabilities and indeed, our aircraft are among the best in the world."

The group's commander further suggested that the Sukhoi Su-30SM and Su-35 have respectively preserved the aerodynamics of the Su-27, while featuring more powerful thrusters and advanced avionics, and Shcheglov said that compared to the Su-27 these newer aircraft are easier to handle in addition to being more maneuverable.

"This is a completely different generation of aircraft. They carry a more accurate navigation system and offer expanded combat employment capabilities," added Shcheglov. "Now an aircraft has become a more pilot-friendly: it makes it possible to keep piloting and not to get distracted so as not to go beyond critical parameters, such as an angle of attack and loads. Even when aerodynamic control tools are not sufficient, an aircraft will activate a controlled thrust vector. This makes the new aircraft differ from the Su-27."

The adoption of the Su-30SM among the Russian Knights has also allowed the group to perform new aerial stunts, which they recently showed off during a demonstration in Malaysia. It used a "maneuver" regime, which reportedly involved controlling the aircraft with the speed cut to zero and accomplishing aerobatics at beyond-critical angles of attack. The group conducted a number of complex maneuvers during that demonstration, many of which are seldom performed as part of the same routine.

In addition the greater maneuverability, the commander of the aerobatics unit has praised the creature comforts of the new aircraft. Unlike the Soviet-era aircraft that were as basic as possible, these provide heater-equipped seats.

"In the Soviet Union, attention was paid to aircraft capabilities while no one thought about comfortable conditions in the pilots’ cockpit," Shcheglov told Tass. "For example, fighter aircraft were on combat duty in the Extreme North while no one took care of seat heaters: pilots had to somehow use the air conditioners for heating. And now the cockpit has both seat heaters and a very comfortable air conditioner: you turn it down for the cold regime and turn it up for the heat."