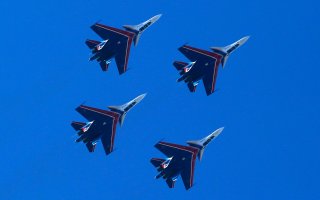 Here's What You Need to Know: The Su-30SM offers numerous internal improvements over its four-decade old predecessor.

The “Russian Knights” aerobatic team took to the Malaysian skies at the LIMA-2019 Aerospace and Maritime exhibition with one of their most technically demanding performances in years.