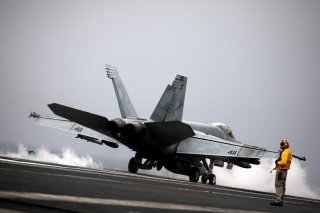 Here's What You Need to Remember: The Navy’s fiscal year 2017 budget request asked for twenty-one new Super Hornets to be added through 2021. The Navy put an additional fourteen Super Hornets on the “unfunded requirements” list to Congress, as part of a clear effort to “bridge a gap” until the F-35C jet arrived.

How was this accomplished? The Navy and its industry partners made modifications to the center barrel section and extended the life of the Nacelles to preserve the airframe structure.

When the F/A-18A and F/A-18C Hornet jets reach eight thousand flight hours, they are sent into the depot for service life extension upgrades. The upgrades are supposed to help the airframes to ten thousand flight hours. However, many of the older aircraft have in need of substantial repairs and, in recent years, a large percentage of the Navy’s fleet of older Hornets have not been in service. Many of those jets are now being moved to the boneyard and, given the arrival of the F-35C fighter jet and plans for a sixth-generation jet, the F-18 model may completely disappear.

At the same time, given the massive extent to which technological upgrades have improved performance, the F-18 Super Hornet is certainly not going to disappear overnight. Upgrades to the 1980s-era jet include new avionics, infrared search and track target radar, quasi-stealthy conformal fuel tanks, and even a special glide-slope flight enhancing software called “Magic Carpet.” These upgrades will help pilots optimize approaches onto a carrier deck.

These upgrades were driven in large measure by the successful performance of the F/A-18 jet as well as a consistent demand for more in recent years. Navy budget requests as far back a decade ago regularly reflected a larger number of F/A-18 jets to fill a gap created by the retirement of F-14 jets and waiting for the arrival of the F-35C jets.

The Navy’s fiscal year 2017 budget request, for example, asked for twenty-one new Super Hornets to be added through 2021. The Navy put an additional fourteen Super Hornets on the “unfunded requirements” list to Congress, as part of a clear effort to “bridge a gap” until the F-35C jet arrived. These requests, which at times were considered urgent given the demand from global combatant commanders, were also driven at a time when the arrival of a sixth-generation aircraft was nowhere on the horizon. That circumstance changed as budget dollars are quickly shifting to the Next Generation Air Dominance effort, for obvious reasons. Now, the F-35C jet is available and in high demand.

What this means, most likely, is that the F/A-18 will fly for many years to come as F-35Cs and, ultimately, sixth-generation aircraft arrive. The Navy just may not wish to acquire new ones or continue to upgrade existing planes.