How Would Iran's Missiles Stack Up Against America's Aircraft Carriers? 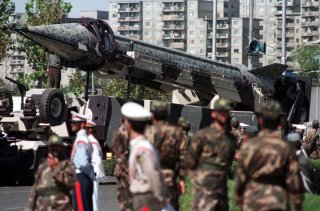 Here's What You Need to Remember: Even under ideal circumstances, Iran’s missile arsenal is unlikely to pose a credible threat against the U.S. Navy. That having been said, Iran can be expected to continue to develop longer-range missiles with greater throw weights and improved accuracy. The time may come when the Pentagon, out of an abundance of caution, might decline to send carriers beyond the Gulf of Oman--but that time is not now.

Iran, as The National Interest pointed out in 2019, has a large and varied ballistic missile arsenal. It is difficult to pin down with certainty Iran’s capabilities, as information inside the country is tightly controlled and the government often exaggerates or is evasive regarding its military capabilities. For the purposes of this article, we’ll assume that Iran possesses the missiles as described by The National Interest, such as missiles with infra-red seekers for terminal guidance (Fateh Mobin) and an anti-ship ballistic missile with a 434-mile range. Iran would need such a capability to even consider hitting ships at sea.