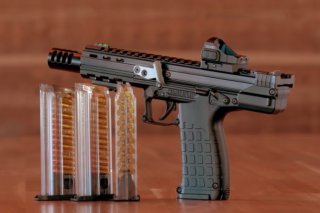 Here's What You Need To Remember: The CP33 handles with the ease normally expected of .22 LR pistols geared for target shooting, with a few twists that help it punch above its modest $475 MSRP. The trigger pull weight is surprisingly light at around 3.3 pounds and designed with attention to minimal creep/overtravel, while the forward grip placement contributes to a balanced handling experience.