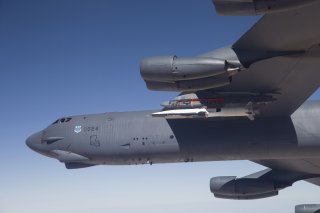 Here's What You Need To Remember: The exact timetable on the weapons' arrival is unknown. What is clear is that the Pentagon has prioritized their development, throwing resources at getting them out as quickly as possible.

The Pentagon wants to build hypersonic weapons quickly and in large numbers.

Senior Department of Defense weapons developers made it clear that the U.S. military services do not just seek to prototype hypersonic weapons, but that they want very large numbers of them battlefield-ready.

This dual-pronged goal explains the rationale for the Pentagon move to stand up a new University Consortium for Applied Hypersonics designed to streamline testing, research, innovation, weapons development and acquisition into a sharp, laser-focused, high-speed operation. Run by Texas A&M, the consortium is moving quickly to award up to $20 million in funding for as many as twenty-six project solicitations, Dr. Gillian Bussey, Director of the Joint Hypersonics Transition Office, told reporters according to a Pentagon transcript of the event.

How fast will large numbers of new hypersonic weapons arrive ready for war? That remains a bit of a mystery but the answer is within a few years. That being said, Pentagon leaders emphasized that there is a broad boundary or goal time of 2028 as a point at which to have many war-ready hypersonics.

“We’re looking to deliver real capabilities in just a handful of years. We don’t say exactly when because we’ve got peer competitors who are carefully monitoring what we’re doing. We do believe that we are in a bit of a race right now,” said Dr. Mark Lewis, Director Of Defense Research And Engineering For Modernization.

Lewis explained that the Pentagon effort encompasses a wide-range of hypersonic weapons applications, depending upon the pace at which new technical innovations arrive, mature and become operational.

“It’s everything from cruise missiles to longer range weapons, to basically high-speed airplanes, and maybe even high-speed spacecraft, all right? The special challenges have to do with when you’re traveling at those sorts of speeds, it’s difficult to propel the craft through the atmosphere,” Lewis told reporters.

When discussing the new consortium, Lewis and Bussey talked about the importance of an interdisciplinary approach among highly-specialized experts. For instance, some researchers may be working on the development and testing of advanced materials to withstand temperatures at hypersonic speeds while others explore atmospheric conditions and air flow boundary layer questions. Innovations, breakthroughs and any kind of innovation and testing taking place within otherwise disparate or disconnected disciplines will need to be synergized to the maximum extent possible.

“We’ll bring in universities from across the country and researchers with expertise, ranging from aerospace, chemistry, thermodynamics, materials, artificial intelligence, possibly quantum, and more,” Bussey said.

All of this relates closely to the term “applied” hypersonics, a word used by design to catapult near-term results from mature technologies rapidly approaching operational readiness. While basic research is still taking place with great focus, the consortium was created due to the new arms race going on with the Chinese and Russians fielding hypersonic weapons.

Kris Osborn is the defense editor for the National Interest. Osborn previously served at the Pentagon as a Highly Qualified Expert with the Office of the Assistant Secretary of the Army—Acquisition, Logistics & Technology. Osborn has also worked as an anchor and on-air military specialist at national TV networks. He has appeared as a guest military expert on Fox News, MSNBC, The Military Channel, and The History Channel. He also has a Masters Degree in Comparative Literature from Columbia University. This article first appeared in October 2020.