If Kim Jung-Un Gets His Way, Pyongyang Will Have 242 Nuclear Weapons by 2027 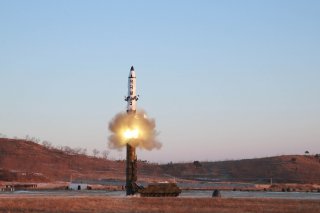 North Korea is continuing to engage in activities related to its nuclear weapons and ballistic missile programs. Satellite imagery analysis conducted by the Center for Strategic and International Studies has found signs of renewed activity at North Korea’s Yongbyon Nuclear Research Center.

These images reveal that the facility’s Radiochemistry Laboratory, the associated thermal plant, and the centrifuge plant restarted activities at some point in early March. Little activity in recent months and years has been observed at the Radiochemistry Lab, and it is difficult to determine with any degree of certainty precisely what is taking place at the facility, analysts believe it may indicate a renewed plutonium reprocessing campaign or, at the very least, a demonstration or reminder that such a campaign could be undertaken at some point in the future. Such a campaign would add to North Korea’s inventory of fissile material needed for the production of nuclear weapons.

The evidence of possible North Koran plutonium reprocessing at its Yongbyon facility emerged just prior to the Biden administration’s announcement that it had completed its review of U.S. North Korea policy. Specific details about the new policy remain scarce, but the administration has described it as a phased approach in pursuit of North Korean denuclearization centered around partial sanctions relief in exchange for North Korea steps towards denuclearization. Officials involved in the policy review process stressed that the Biden administration’s policy is distinct from the policies of previous administrations, which they acknowledged had failed to prevent continued growth of North Korea’s nuclear weapons and ballistic missile arsenals.

Experts have suggested that the repeated focus on denuclearization is largely to blame, arguing that the United States should instead adopt a policy aimed at addressing the threat posed by a nuclear armed North Korea including by negotiating a freeze on plutonium and uranium nuclear activities at the Yongbyon facility.

North Korean leader Kim Jong Un has stated that North Korea will continue to develop its strategic weapons capability as well as pursue other military capabilities such as tactical nuclear weapons.