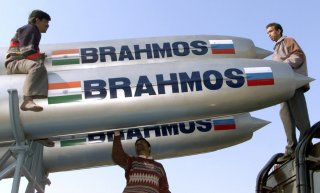 Here's What You Need To Remember: Vertical deep-capability allows the missile to be fired at a “near-vertical” trajectory of 90 degree, climbing fourteen 14 kilometers before making making a steep dive toward its target. Mishra asserts that this will make BrahMos more effective on mountainous terrain and against bunkers as well as large surface vessels.

With the BrahMos II venture put on indefinite hold, the Indian military is forging ahead with  new, long-range and deep-dive versions of their BrahMos supersonic cruise missile.

Earlier this week, BrahMos CEO Sudhir Kumar Mishra announced that vertical deep-dive and 500 kilometer-range BrahMos variants are ready to enter India’s missile arsenal: "India has successfully test-fired a vertical deep dive version of BrahMos, the world's fastest supersonic cruise missile, that can now change the dynamics of conventional warfare...the upgraded version of the missile with enhanced range of up to 500 km is also ready.” Both of these new variants will feature the Mach 2.8 speed of the original BrahMos missile, roughly three times the speed of sound.

As the name implies, vertical deep-capability allows the missile to be fired at a “near-vertical” trajectory of 90 degree, climbing fourteen 14 kilometers before making making a steep dive toward its target. Mishra asserts that this will make BrahMos more effective on mountainous terrain and against bunkers as well as large surface vessels, suggesting that these improvements are aimed at bolstering Indian missile strike capability vis-à-vis China amid ongoing tensions over the Tibet region.

This is admittedly an unorthodox way to use supersonic cruise missiles, but one that may prove cost-effective for India’s budding, homegrown defense industry; modifying the already-existing BrahMos platform can save R&D costs over the risky and logistically difficult venture of investing in a new line of bunker buster-bomb technology.

Mishra claims that, with the introduction of the air-launched 500-kilometer BrahMos variant, the Indian air force (IAF) is the first in the world to arm fighter jets with this type of long-range missile. The successful test was reportedly conducted on a Sukhoi Su-30MKI. Given the massive cost and technical challenges of reinforcing the Su-30MKI’s undercarriage and expanding its hardpoints to accommodate the weight of the prior air-launched, 400-kilometer “BrahMos A”, it remains unknown what-- if any-- further modifications were required to install this latest variant.

A smaller and lighter version of BrahMos, “BrahMos-NG,” is reportedly compatible with the MiG-29K and even France’s Dassault Rafale, but this larger variant seems to be exclusively designed for India’s fleet of over forty Su-30 fighters that are specially modified to accommodate large cruise missiles.

Last year, India’s Defense Research and Development Organization (DRDO) announced that it was developing an 800-kilometer BrahMos missile. It is unclear if this latest 500-kilometer variant is a developmental stepping stone to that ambitious goal, or a finished product in of itself.

These exponential gains over the 300-kilometer range of the very first BrahMos missile, developed jointly by Russia and India, were made possible by India’s June 2016 entry into the  Missile Technology Control Regime (MTCR), which prevents members from sharing missiles with a range in excess of 300 kilometers with nonmembers.

India has enjoyed rapid progress in developing BrahMos technology over the past several years, but the same cannot be said for the Russian-Indian project to produce its hypersonic successor. BrahMos II has languished in an ongoing cycle of overeager estimates followed by delays since its initial announcement in 2008, leading recent defense commentary to surmise that New Delhi may opt to purchase Russia’s upcoming Zircon hypersonic missiles if the BrahMos II program fails to yield substantive results in the near future.