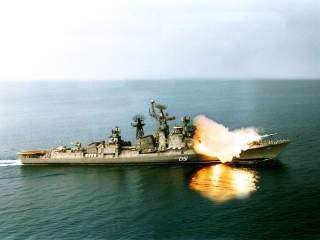 Russia’s military made headlines in 2018 when it announced it had hypersonic missiles that are ready for combat. While many nations are developing these advanced weapons, Russia appears to hold the lead and is not stopping, with Putin announcing that Russia plans to field even more in 2019.

The short answer is that the BrahMos II is not coming any time soon. While Russian hypersonic missile programs have steadily proceeded, BrahMos II development has intermittently started and stopped multiple times, with deadlines and dates changing almost every year. It’s possible that it may never enter service.

Following the announcement of the project in 2008, the next announcement regarding BrahMos came in 2009. The general director of the BrahMos program and CEO of BrahMos Aerospace, A. S. Pillai said that the hypersonic variant of the BrahMos was in development and would be ready by 2013.

This timeline was revised a year later in 2010. Pillai stated in an interview about the future of BrahMos that testing of the hypersonic BrahMos would begin “five years down the line,” in 2015. In the same interview, Pillai discussed the integration of the BrahMos onto air platforms, a goal that was achieved on time.

However, the BrahMos II would find itself delayed again. The next news about the missile came in 2012, when it was said that the missile would have a prototype ready for flight testing in 2017. Interestingly, in that announcement, Pillai suggested that lab tests of the missile had already occurred, lending credence to the idea that the prototype would be ready by 2017.

Seemingly on track, a model of the missile’s design was displayed at the Aero India 2013 defense exposition.

This was not to be. At Aero India 2015, the new CEO of BrahMos Aerospace, Sudhir Mishra said that scientists had quietly begun work on the hypersonic version of the supersonic BrahMos missile. He expressed the view that the India may be the first country in the world to field a hypersonic missile “in the next 7-12 years”. This pushed the timeline for the BrahMos II back to 2022-2027.

But in 2016, the marketing director of BrahMos Aerospace, Praveen Pathak, suggested that this was not true in an interview with the Russian TASS news service. He said that work on the hypersonic BrahMos would begin in 2022, and that a prototype would be ready two years later in 2024. At this point, it’s likely that earlier work on the hypersonic missile was wiped clean, since Pathak suggested that the missile’s shape and design were not known. During the interview, he stated that “the preliminary design is now being developed.”

In 2018 this was pushed back further. Mishra told the Times of India that "We will require seven to ten years from now to become a hypersonic missile system,” suggesting that the hypersonic BrahMos would only reach service between 2025 and 2028.

So where does the BrahMos II stand in 2019? In a report about the BrahMos at Aero India 2019, it was simply said that the hypersonic version would exist “in a few years.” While this is far more realistic, given that Russia has nearly completed development of its own missiles, time will tell if the BrahMos II is delayed yet again.

The BrahMos II project may suffer the same fate as many other Indian defense projects if a rapid need for a hypersonic missile is revealed in the region. While the original BrahMos project was a successful joint venture between India and Russia, it largely proceeded on schedule. BrahMos II has not.

India resently has shown more willingness to replace domestic systems with imported ones, adopting Spike MR again in 2018 after initially cancelling the adoption in favor of domestic systems. They also have adopted three foreign rifles to replace the domestic INSAS, and are acquiring more T-90s instead of the domestic Arjun. It’s possible that the Indian military may simply adopt the Russian Zircon hypersonic missile (if Russia agrees to export it) if the BrahMos II program suffers further delays.