Inside America’s 1956 Nuclear War Plan against the USSR 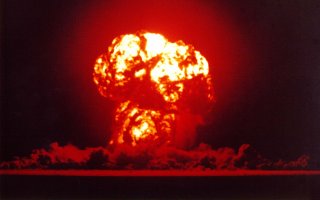 Here is What You Need to Remember: Stanley Kubrick probably had no idea just how close he was to the truth with his movie Dr. Strangelove. Eight years earlier, the Air Force put together a report detailing how to obliterate the Soviet Union, China and their allies

In one scene from Stanley Kubrick’s iconic Cold War film Dr. Strangelove, an irate president Merkin Muffley refuses to get on board with a massive nuclear attack already in progress. Played by Peter Sellers, Muffley is trying to decide what to do after a rogue U.S. Air Force general sends his planes to bomb the Soviet Union.

Released to a public faced with the ever present threat of nuclear annihilation in 1964, Kubrick probably had no idea just how close he was to the truth. Eight years earlier, the Air Force put together a report detailing how to obliterate the Soviet Union, China and their allies.

The National Security Archive at George Washington University obtained the document through a Mandatory Declassification Review and released it online on Dec. 22, 2015.

The flying branch’s blandly titled 1956 Atomic Weapons Requirement Study outlined all the targets it planned to hit if World War III broke out and how many bombers and nuclear weapons it would need to get the job done. Over the course of more than 800 pages, intelligence analysts identified more than 2,000 potential “designated ground zeroes” in the Soviet Union and elsewhere, including both military bases and cities.

“The SAC study includes chilling details,” William Burr, a nuclear researcher and analyst at the National Security Archive, wrote along with the release. “According to its authors, their target priorities and nuclear bombing tactics would expose nearby civilians and ‘friendly forces and people’ to high levels of deadly radioactive fallout.”

In short, the report is a catalog of nuclear death.

In 1956, Washington no longer had a monopoly on atomic bombs, but appeared to be winning the nuclear arms race. While Moscow had set off its first atomic weapon seven years before, the Pentagon had already started fielding even more powerful thermonuclear hydrogen bombs.

With long-range ballistic missiles still in development, the Air Force relied on a fleet of lumbering bombers and faster fighters to lob the nuclear arsenal in any actual war. The attack would come from warplanes armed with free-fall bombs or from early cruise missiles like the much maligned Snark.

In 1945, the first operational atomic bomb, nicknamed Little Boy, had exploded over the Japanese city of Hiroshima with a force equivalent to 15,000 tons of TNT. The Mark 36 H-bomb could produce an explosion more than 250 times as powerful. And a massive B-52 could carry two of the 17,000 pound weapons.

According to the study, smaller B-47 bombers and F-101 fighters would carry smaller nuclear and thermonuclear bombs to their targets. The Air Force envisioned a fleet of more than 2,000 aircraft and an equal number of cruise missiles.

At the time, the flying branch treated these weapons as pilotless planes for accounting purposes. Though not under the control of Strategic Air Command, the officers expected another 180 land-based intermediate range ballistic missiles in Europe and Turkey would join any attack.

With the threat of Soviet Tu-16 bombers and other aircraft mounting a counterattack or destroying following waves of American planes, the Air Force’s main goal was to completely eliminate the Soviet Bloc’s air bases. After that, the pilots would move on to blast a host of secondary targets.

“Those targets or target complexes that do not have a direct bearing on the destruction of SovBloc air power objective are part of the systematic destruction objective,” the authors explained. “The importance of the latter is not minimized.”

H-bombs would be reserved for important military targets, like air bases. American planes would drop atomic bombs on the rest.

The Air Force would hit some targets more than once just to be sure nothing was left standing. “It was mutually agreed by all the command representatives that some duplication of effort on high-priority … targets would be both desirable and necessary,” the study explained.

The report includes a five-page key to every single category that might appear in the voluminous lists of bombing targets. It includes country codes for various facilities in all eight members of the Warsaw Pact. Depending on the type of target, three digit identifiers for Communist China, North Korea, North Vietnam and pre-Shah Iran might also be present.

The analysts clearly tried to pick out anything and everything that might have any effect on the war effort, from facilities producing cutting tools to rubber tires to the antibiotic streptomycin. Most notably, the Air Force defined “275” as the code for “population.”

“The authors developed a plan for the ‘systematic destruction’ of Soviet bloc urban-industrial targets that specifically and explicitly targeted ‘population’ in all cities, including Beijing, Moscow, Leningrad, East Berlin and Warsaw,” Burr pointed out. “Purposefully targeting civilian populations as such directly conflicted with the international norms of the day, which prohibited attacks on people per se (as opposed to military installations with civilians nearby).”

But other contemporary sources make it abundantly clear the Pentagon saw any person tied to a war effort as a viable military target. A now declassified 1952 U.S. Navy film on chemical and biological warfare specifically states a goal “to incapacitate the enemy’s armed forces and that portion of his human population that directly supports them.” With similar thoughts in mind, the U.S. Army had looked into radiological warfare and built deadly dirty bombs.

The Pentagon and the Air Force hadn’t come to this conclusion spontaneously, either. Washington had wrought nearly unimaginable destruction on Japan with thousands of incendiary bombs — a campaign that was far deadlier than the destruction of Hiroshima and Nagasaki — ostensibly to eliminate cottage industries and other activities supporting Tokyo’s forces.

During World War II, the Allies had blown up dams, farms, power stations, mines and a host of other “dual use” facilities that served both the military and civilian populations. This remained the Pentagon’s policy right through the conflict in Vietnam, when Air Force planes bombed similar targets and sprayed thousands of gallons of herbicide in part to purposefully destroy crops that could feed guerrillas.

But the nuclear war described in the Air Force’s study would have been even more devastating. At the time, Moscow alone had more than four million residents.

In reality, the “breaks” mentioned by Gen. Turgidson in Dr. Strangelove could’ve easily meant casualties several orders of magnitude greater than his fictional estimates. And this doesn’t take into account lasting effects from radioactive fallout, which could kill even more people, poison fields and groundwater and potentially make certain areas uninhabitable long after the final bombs hit the ground.

The flying branch said it had done everything it could to minimize the total number of bombs it needed for the mission — a number that remains classified. The report suggests that letting the bombs explode closer to the surface would help reduce any fallout.

“The anonymous authors may not have been scientists,” Burr said. “But in light of the 1954 Castle Bravo test, which spread radioactive debris globally, they should have known better.”

Regardless, the Air Force explained it simply couldn’t afford to care about these concerns. “While … the probability of radioactive fall-outs [sic] affecting friendly forces and peoples have been considered, the requirement to win the Air Power Battle is paramount to all other considerations,” the authors declared. “If the Air Power Battle is not won, the consequences to the friendly world will be far more disastrous.”

Thankfully, no one ever had to test that hypothesis.