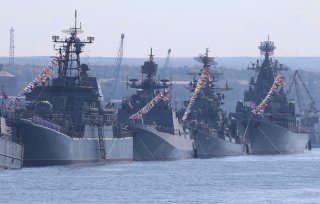 Defense Secretary Lloyd Austin’s trip to the Black Sea in support of allied cooperation and Russian deterrence came amid increasing Russian naval activity in the region. The United States has longstanding concerns about the security of key NATO partners bordering the Black Sea. Romania and Bulgaria are NATO members with a large Black Sea coastline—an area that is vulnerable to an attack by a Russian submarine or ship.

Austin met with Romanian and Georgian defense officials on a recent trip to the region to solidify collaborative deterrence against Russian activity. Many security concerns regarding Russia’s military presence in the Black Sea were validated by the Eurasian country’s recent submarine warfare drill in the region. The Russian Black Sea military exercise involved several Tomahawk-like Kalibr-PL cruise missiles against “notional enemy warships,” according to Russia’s TASS news agency.

These Russian exercises underscore the significance of the undersea threat the country poses. Russia’s Navy is smaller and less capable compared to the U.S. Navy, yet its submarine fleet is extremely advanced, lethal and sophisticated. Russian cruise-missile-armed attack submarines could potentially attack the coastal areas along Romania and Bulgaria and inland military infrastructures. The U.S. Navy regularly uses its destroyers to conduct security and stability missions in the Black Sea in support of exercises at times including U.S. Coast Guard vessels.

It would be unsurprising if the Defense Department were to send additional anti-submarine warfare assets to the Black Sea to track and ultimately counter Russian submarines. Such an initiative could take the form of large, sub-hunting surveillance planes such as the P-8 Poseidon or surface drones tasked with towing sonars to track activity beneath the surface. Then there is the possibility that U.S. Navy submarines could conduct clandestine undersea surveillance missions or launch smaller, quieter and less detectable undersea drones capable of surveilling sensitive and high-risk areas for potential threats. It’s important to operate with the ability to track moving Russian submarines because they can launch cruise missiles prior to quickly taking off to prevent enemies from finding the launch location.

Russian submarines operating at depth may be difficult to spot with overhead drones focused primarily on the surface, a circumstance which may call for the use of destroyer-launched MH-60 helicopters equipped with air-launched sonobuoys to search for undersea enemy activity.