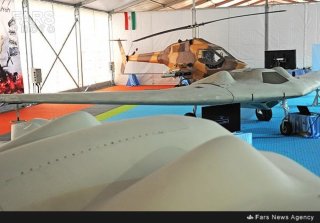 Here's What You Need to Remember: Until these new drones are actually used, it is unclear whether these are an actual threat or just 21st-century saber-rattling.

The Iranian Defense Ministry announced that it has acquired three new bomb-capable unmanned aerial vehicles (UAVs) – more commonly known as "drones" – that are capable of flying almost 1,000 miles and from an altitude of up to 45,000 feet. The announcement was made by Defense Minister Brig.-Gen. Amir Hatami on state television on Saturday.

Hatami said the UAVs could also be used to monitor "enemy movements from a considerable distance" per a report by the Reuters News Agency. The drones were reportedly manufactured by Iran's military industry with the participation from local universities, Hatami added.

If the statements from Tehran are accurate that would rival the best drones that the United States and its allies are now flying in the Persian Gulf region. In 2019, Iran also announced that it had developed three domestically produced "precision-guided smart bombs" that could be installed on UAV platforms.

Drones are considered a key element in Iran's border surveillance efforts, notably over the Gulf waters around the Strait of Hormuz, where one-fifth of the world's oil supply currently flows.

While the exact number of new drones wasn't made clear, the Defense Ministry has said that it provided a "mass delivery" of the Ababil-3 and Karar drones to the Islamic Republic's Air Force – but neither is capable of the range suggested by Hatami.

It is no secret that Iran has deployed drones in its efforts to combat ISIS, and Iran's Islamic Revolutionary Guards Corps has used the Ababil-3, but it has a range of just 150km. It is a redesign of earlier Iranian UAVs and is likely based on a South African platform, which may have been borrowed from an older Israeli design.

The Karar UAV was also developed as a "strategic" weapon, but according to reports from The Jerusalem Post, the drone could be used in a "kamikaze" capacity much like a cruise missile. Iran has also reportedly supplied these to the Houthi rebels in Yemen, who have used the Karar against Saudi Arabia in dozens of attacks. Iran has also sent some of the Karar drones to Syria's T-4 base, and one was shot down after it fly into Israeli airspace.

The U.S. Navy has successfully stopped some of Iran's shipments of drones and drone parts on the way to Yemen and this has included gyroscopes and other technology.

The timing for this latest drone announcement is noteworthy for a few reasons – the first that it would suggest a major leap forward in UAV technology for the Islamic Republic.

It was just last September that Brig.-Gen. Alireza Sabahifard, the head of the Islamic Republic's Air Force, revealed the newly developed Kian UAV at a ceremony in Tehran. It was reported to have a range of 600 miles and could climb to an altitude of 15,000 feet.

This newly announced drone would be significantly more sophisticated, but as The Jerusalem Post's report noted, Iran's unveiling was linked to its annual army day, which was used to also highlight the nation's efforts in battling COVID-19. The announcement could be a way to showcase that Iran's technological advances have continued despite the U.S. sanctions as well as the pandemic.

Until these new drones are actually used, it is unclear whether these are an actual threat or just 21st-century saber-rattling.

This article appeared several months ago and is being republished due to reader interest.