Iran's Khorramshahr Missile is a Knockoff of a Knockoff 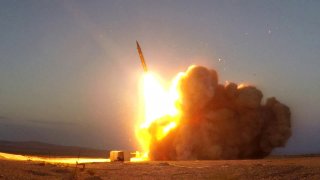 Here's What You Need To Remember: The missile has a 2,000 kilometer range - certainly far enough to hit Tel Aviv. Even if Iran were to get a nuclear weapon, it probably wouldn't be nuclear-tipped, but would be very dangerous nonetheless.

The Khorramshahr missile is classic Iran—vintage Soviet technology adapted by another country, and then again upgraded and tweaked by Iran. This makes the Khorramshahr a copy… of a copy. North Korea has been a steadfast exporter of weapons to Iran and that is where Tehran first got its hands on the adapted Soviet missile.

Iran’s missile arsenal is massive and represents perhaps the largest and most capable missile collection in the Middle East today. Though Iran is not a nuclear power, some of the country’s more capable missiles could hit not only Israel, but parts of Eastern and southern Europe (including some NATO countries), the western edge of China, most of India, and virtually the entire Middle East as well.

Yet Iran claims its Khorramshahr missile can’t shoot as far as some experts think. Speculation as to why its derivative’s range is so much less have centered on the Khorramshahr’s road-mobile maneuverability on the ground, thanks to its smaller size. Some arms experts have simply said that Iran may be inaccurately reporting the Khorramshahr’s range so as to not worry European countries that would otherwise lie in the Khorramshahr’s crosshairs.

Iran’s Khorramshahr is relatively new and was first seen during an Iranian military parade in 2017. The large missile rides on a road-mobile ground launcher, and somewhat surprisingly for such a setup, is liquid-fueled rather than solid-fueled. Like other Iranian weapon projects, the Khorramshahr has its roots not in Iran but abroad—and comes from North Korea.

There have been reports that the Khorramshahr is a derivative of North Korea’s Musudan ballistic missile. The North Korean Musudan is likely more powerful, with roughly double the reported range of the Khorramshahr, and is likely a variant of a similar submarine-launched missile of Soviet origin.

One report said that the Khorramshahr’s accuracy is around 1,500 meters. Though the warhead is quite heavy at 1,800 kilos or nearly 4,000 pounds, inaccuracy on this scale would certainly eat into the Khorramshahr’s explosive potential, both literally and figuratively.

This may not matter to Iranian planning however, as the Khorramshahr could be capable of carrying a nuclear warhead, in which case accuracy becomes somewhat of a moot point. Configuring the Khorramshahr to carry a nuclear payload is quite easy.

Though the Khorramshahr may not ever be nuclear armed, it serves Iran’s foreign policy agenda well—keeping adversaries in the Middle East uncomfortably aware of Iran’s missile potential, while downplaying their effective reach and power. This strategy essentially under-promises but over-delivers when it comes to missile capabilities in particular. NATO and Israel beware.