Iran's Promised Destroyer Is Still Nowhere to Be Found 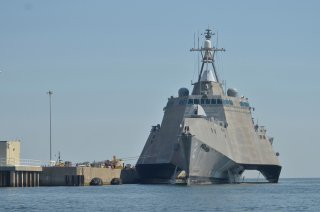 Here's What You Need To Remember: If Iran would be able to manufacture a new stealthy trimaran ship, it would be a significant leap forward. But, for a country that struggles to domestically manufacture any weapons platforms, it is unlikely that the Hormuz will leave the mock-up stage. Like many of Iran’s weapons projects, be skeptical. Very skeptical.

In November of 2019, Iran showed off a small model of a new weapons project, the Hormuz destroyer. Some photos of which can be seen on Twitter.

The hull is a trimaran design. A Trimaran design has one main hull, like a conventional ship, as well as two smaller outrigger hulls. The purpose of the Trimaran design is to allow for lower hydrodynamic drag on the hull.

The Trimaran design is also used on the stealthy American Independence-class Littoral Combat Ships, which the Hormuz project is seemingly based on, though the Independence-class has been plagued with problems and will be retired early.

The overall design looks very much like the Independence-class. Besides the nearly-identical hulls, stern, and bow shape, the Hormuz project is also (seemingly) powered by four pump jets, rather than propellers, like nearly all other ships and submarines.

Pump jets offer much more maneuverability than conventional propeller or screw-driven designs, including advantages in acceleration, tight turns and rapid deceleration. The technology is considerably more complicated than rational screws.

In theory at least, the trimaran design would be ideal for the shallow, relatively narrow waters of the Strait of Hormuz.

The Naval expert H. I. Sutton succinctly explained the Hormuz project’s weapons compliment, which would be massive if true:

“The Hormuz Project promises to be a very heavily armed warship. An incredible 96 vertical missile tubes will supposedly be squeezed into the forward deck. The type of missile to be carried is unclear but the large number of tubes and their position suggests that they will be very small. Possibly short range air defense missiles.”

The Hormuz would have missiles both nearer the bow as well as the stern.

“Behind the bridge are yet more launchers for larger missiles, likely anti-ship weapons. The main anti-ship missiles in service with Iranian forces are based on the Chinese C-802 family. These are approximately comparable to the Harpoon missile.”

In addition to anti-ship missiles, the Hormuz project would have defensive weapons for targets nearer to the ship, four gatling guns, and a conventional 76 millimeter gun at the bow.

Iran has made exaggerated claims about their weapons systems before, including likely rebadged Russian T-90 tanks, refurbished, nearly-antique American F-5s, and what is probably a remote-control toy claimed to be a fifth-generation stealth-fighter.

If Iran would be able to manufacture a new stealthy trimaran ship, it would be a significant leap forward. But, for a country that struggles to domestically manufacture any weapons platforms, it is unlikely that the Hormuz will leave the mock-up stage. Like many of Iran’s weapons projects, be skeptical. Very skeptical.

Caleb Larson is a defense writer for the National Interest. He holds a Master of Public Policy and covers U.S. and Russian security, European defense issues, and German politics and culture. This first appeared in April.