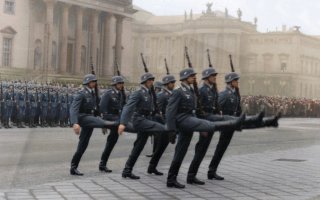 Here's What You Need to Know: The IRA hoped it could secure military assistance from Germany.

Acentury after the Irish War of Independence, the issue of Ireland’s partition still inspires contention as London seeks to withdraw from the European Union while preserving Northern Ireland’s open border with the Republic of Ireland—one of the important fruits of the Good Friday accords which largely ended the violence of “the Troubles.”

During World War II, another strange episode highlights the passions burning around the issue of Ireland’s partition—and of the UK and Irish Republic’s ability to (discreetly) work together in pursuit of common interests.

The IRA and the S-Plan

In 1938, Irish Republican Army leader Seán Russell began setting in motion the S-Plan: a campaign of sabotage and terrorist bombings targeting factories, public utilities and transportation, commercial centers and newspapers in Great Britain. Russell hoped the attacks would pressure London into negotiating the incorporation of the six counties of Northern Ireland into the Republic.

Between January 1939 and May 1940, the IRA detonated over 300 bombs in the UK, injuring ninety-six civilians and killing ten. Half of the dead were killed on August 25, 1939, by a bomb concealed in a bicycle in Coventry (see news footage here).

Roughly a week later, the UK declared war on Nazi German following the invasion of Poland—and the IRA reached out to the German Abwehr’s intelligence agency for assistance. Though today associated with left-wing politics, the IRA of the 1930s and 40s favored a Catholic theocracy ruling over a united Ireland and saw the Nazis as viable allies.

Traveling from the United States to Genoa, Italy and then to Berlin, Russell finally met with Germany’s Abwehr intelligence agency in May 1940. The Abwehr had already comically failed in several attempts to insert agents into Ireland.

By then, Plan S was backfiring spectacularly. The onset of World War II led both London and Dublin to increase domestic censorship and espionage. Though Irish prime minister Éamon de Valera insisted on Irish neutrality in the conflict, he nonetheless tightened restrictions on civil liberties during a period known as “the Emergency.”

IRA actions certainly fostered the sense that there was an Emergency. On Christmas Day, 1939, IRA infiltrators overpowered thirteen Irish Army soldiers guarding Dublin’s Magazine Fort and made off with over a million rounds of ammunition in thirteen trucks.

The impressive heist, however, did the IRA little good, as it lacked provisions to store the massive haul, nearly all of which was recovered by Irish authorities within a week’s time.

The IRA campaign led to a crackdown in which over 1,100 IRA members were imprisoned or detained. Several were executed by both the British and Irish. The Irish Army also deployed eleven mobile infantry columns reinforced with armored cars and artillery to respond to potential IRA attacks.

Even the Nazi spies disapproved of how the IRA was carrying out S-Plan, complaining to Russell that the IRA should be “more effectual against military as opposed to civilian objectives.”

After being trained in handling explosives, Russell boarded submarine U-65 on August 4 to be transported back to Galway, Ireland—but died from a stomach condition while in transit.

Meanwhile, in Russell’s absence, acting IRA chief Stephen Hayes authorized member Liam Gaynor to sketch together plans for a Nazi invasion, in the hopes it would help secure military assistance from Germany.

Gaynor’s proposed a German amphibious assault at the city of Derry/Londonderry in Northern Ireland—supported by an IRA ‘ground offensive’ staging from Count Leitrim in the Republic of Ireland aimed at the RAF base at Lough Erne.

An Irish businessman of Swiss German descent named Stephen Held ferried the plans to Germany in April 1940 and presented them to the Abwehr.

But the sketchy concept failed to address the logistics of landing German troops in Ireland. The Abwehr concluded it was useless—even “heartbreaking” in the words of German spy Hermann Görtz, who would parachute into Ireland on May 4.

Later, when Görtz discussed the plan with Hayes, the IRA leader admitted his supporters utterly lacked the weaponry to execute the plan and hoped the Germans could deliver arms by submarine, as had been (unsuccessfully) attempted prior to the Easter Rebellion during World War I.

A few weeks later on May 22, the Irish Republic’s Garda (police) stormed Held’s house and captured a copy of Plan Kathleen, as well as Görtz’s parachute. The German agent escaped but was finally caught in November 1941.

The Irish leadership were now aware of the IRA offer to support a Nazi invasion—and promptly forwarded the details to the UK’s MI5. British intelligence by then also knew of Case Green—an unrelated German military plan to invade the neutral Irish Republic, detailed in a companion article.

On May 24, the Irish Secretary of External Affairs and a military intelligence officer attended secret meeting in London with British officials, where they discussed how the two states could cooperate against a Nazi invasion. Further meetings were held in Belfast.

The Irish military knew it didn’t have the firepower to stop a serious German invasion. The Army counted just 8,000 regular personnel in 1939 in two reinforced brigades. In terms of armor and artillery, it possessed only forty-seven field guns, two Swedish L60 light tanks and twenty-five Landsverk and Rolls Royce armored cars.

Recognizing its vulnerability, Dublin secretly collaborated with the UK on a contingency dubbed Plan W. Should de Valera request British assistance, the codeword “Pumpkins” would be transmitted to the military command in Northern Ireland, triggering the entry of British troops into the Republic.

The 53rd Welsh Infantry Division based in Belfast would advance along three axes to come to the relief of Dublin, while the 61st division would move westward to secure the deep-water port of Lough Swilly. Five squadrons of RAF Hurricane fighters and Fairey Battle bombers would redeploy to airfields in Dublin and Collinstown to provide air support, as well as a regiment of heavy anti-aircraft artillery. The Royal Navy would cordon off the seas around Ireland with a blockade.

In return, Dublin arranged for a secret airbase in County Tipperary codenamed “RathDuff” to serve as a last outpost for RAF resistance, should the UK be overrun by a German invasion.

Despite being premised on an invitation from Dublin, British plans often referred to possible resistance from Irish civilians.

The Emergency also precipitated a major buildup in the Irish Army, which quintupled regular forces to 40,000 personnel as detailed in a lecture by Col. Donal o’Carroll.

From two infantry brigades the Irish army increased to eight, placed under two divisional headquarters. It also deployed eleven company-sized armored and motorized squadrons equipped with eighty armored cars, most of them domestically manufactured Doges and Fords. These were to serve as “first responder” to tackle enemy paratroopers.

The Air Corps also began impounding and restoring crash-landed RAF Hurricane fighters, and had eighteen of the more advanced aircraft in service by the end of World War II.

Fortunately, various Nazi schemes to invade Ireland never amounted to much. They all fundamentally depended on taking place in concert with an invasion of Great Britain, which never became viable.

Nonetheless, the cooperation between Dublin and UK showed that, should push come to shove, the former foes were secretly ready to fight together against foreign invasion.