Iron Dome: How Israel Defends Itself From Incoming Missiles 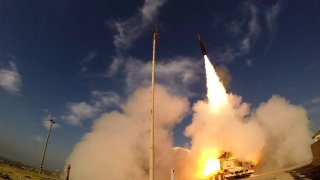 Here's What You Need To Remember: No other existing air-defense system can claim the over one-thousands intercepts achieved by the Iron Dome.

Since 2011, the Israel Defense Force has used the Iron Dome system to shoot down over 1,700 unguided rockets and mortar shells launched by militants in Lebanon, Syria, and the Gaza Strip against Israeli communities. An Iron Dome battery can also engage aircraft, drones, large artillery shells and possibly even cruise and ballistic missiles—as proven by its shootdown of an Iranian Fateh ballistic missile on January 20, 2019.

Thus the Iron Dome may require adaptation to serve as more than an interim solution. Furthermore, as the system’s limited range means it can only provide local defense, more than two to four batteries would be required to provide substantial coverage for frontline troops. Thus, a favorable evaluation could lead to a much larger-scale procurement.

Indeed, the Pentagon is considering investing large sums to make Iron Dome networkable with other U.S. air-defense systems, and in 2016 even tested integrating the Tamir missile into a fifteen-cell “Multi-Mission Launcher” designed to fire a variety of missiles. The Tamir’s capabilities may actually make a more natural fit for other short-range air-defense missions such as shooting down surveillance or kamikaze drones, helicopters, and even standard 155-millimeter artillery shells.

This article first appeared in 2019, and is being republished due to reader interest.