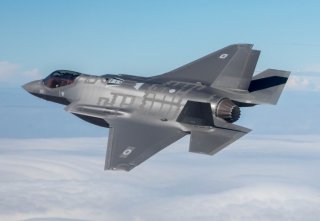 Here's What You Need to Remember: Israel’s conventional and specially modified F-35 fleet is poised to greatly enhance Jerusalem’s ability to project power in the region, as it strives to hold on to the mantle of the best Air Force in the Middle East into the coming decades.

Israel’s F-35I Adir fighters have taken part in drills in Italy, marking their first foreign outing. Six of the jets departed on Thursday to participate in the Falcon Strike 2021 exercises. Accompanying the F-35’s are16A/Bs from the Israeli Defense Forces’ (IAF) 116th Squadron, G550 Airborne early warning and control planes, and support units, for a total of around thirty Israeli aircraft.

Nominally, the IAF joined Falcon Strike 2021 to hone joint operations capabilities with allies and to train aircraft maneuvers in an unfamiliar setting. But an IAF officer reportedly admitted off the record that there is a more immediate purpose to these exercises: “Iran is in our focus,” he said tersely. Tensions between Israel and Iran have spiked in recent months, with Tehran “cheering” on — and reportedly arming — Hamas in the recent resurgence of the Gaza conflict, shortly on the heels of allegations that Israel carried out strikes against Iran’s Natanz nuclear facility.

Israel moved to import Lockheed Martin’s fifth-generation stealth fighter in the early 2010s, but with a special arrangement: the first nineteen imported units would be standard F-35A models, but the following thirty-one will be specially modified by Israeli defense firms to better fit the IAF’s mission parameters. This compromise helped to allay the fears of Israeli Defense contractors that the massive export contract is leaving local industry out of the equation.

The Pentagon is famously loath to greenlight foreign hardware changes to the F-35 (with a few notable exceptions, including the European-made Meteor missile for British F-35’s and the Norwegian Naval Strike Missile for Japan and South Korea), especially on the level being sought by the IAF. Israeli officials have been nothing if not explicit in their assessment of the F-35’s stealth performance.  “We think the stealth protection will be good for 5–10 years, but the aircraft will be in service for 30–40 years,” a senior IAF official said. Rather, the IAF is more interested in the F-35 as an advanced electronic warfare (EW) platform: “So we need electronic warfare capabilities that can be rapidly improved. The basic F-35 design is OK. We can make do with adding more software.”

Jerusalem appears to have reached a tentative understanding with Washington: the IAF will not make changes to the plane’s core design, but will instead layer its EW modifications on top of the aircraft’s existing avionics infrastructure. The changes include datalink functionality that is unique to Israel’s Armed Forces, as well as Israeli-manufactured helmet-mounted displays. Israeli defense industry insiders said that the country’s bespoke command, control, communications, and computing (C4) architecture layers on top of the F-35’s existing electronics suite as non-invasively as a smartphone app. But the special arrangement doesn’t end here: while exported F-35’s are required to undergo deep maintenance only at Lockheed Martin facilities, Israel’s Nevatim Air Base reportedly has the equipment to conduct deep F-35 repairs and other non-routine overhauls.

Israel’s conventional and specially modified F-35 fleet is poised to greatly enhance Jerusalem’s ability to project power in the region, as it strives to hold on to the mantle of the best Air Force in the Middle East into the coming decades.