The Gaza Tightrope: Can Russia Balance Good Relations with Both Israel and Palestine? 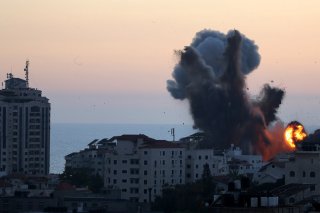 As the Gaza conflict escalates, the Kremlin walks a tightrope to preserve and extend its intricate web of interests in the Middle East.

The Israel Defense Forces (IDF) remain locked in an increasingly costly struggle with Hamas and the Palestinian Islamic Jihad (PIJ). The IDF announced earlier this week that it struck as many as 600 targets in the Gaza Strip, including missile production facilities and several Hamas commanders. Israel’s Prime Minister Benjamin Netanyahu vowed to “extract a very heavy price from Hamas,” even as Hamas/PIJ forces continue barraging southern and coastal Israel with hundreds of short-range rockets. “We have much more to give,” said Hamas spokesman Abu Obaida. “The decision to hit Tel Aviv, Dimona, and Jerusalem is easier for us than drinking water. Your technology and assassinations don't scare us.” As of the time of writing, at least seven were killed in Israel and 113 more are reported dead in Gaza. The current fighting between Israel and Hamas/PIJ is the heaviest since the 2014 Gaza War, but Jerusalem faces a parallel threat from within. Riots, street brawls, looting, and religious vandalism have broken out across the country, as Israel’s Palestinian minority clashes with police and right-leaning nationalists.

The ongoing Gaza conflict has elicited widespread concern, but few concrete policy solutions, from the international community. The Biden administration, bound by a decades-old security commitment to Israel but facing growing pressure from the vocal pro-Palestinian wing of the democratic party, has struggled to formulate a concrete position beyond calling for an end to the fighting. Meanwhile, Moscow is facing difficult choices of its own.

In his ongoing efforts to position himself as the de-facto leader of the  Muslim world, Turkish President Recep Tayyip Erdogan said that the international community must “give Israel a strong and deterrent lesson.” According to a press statement issued by Ankara, Erdogan likewise broached the idea of an “international protection force to shield the Palestinians” in a recent phone call with Russia’s Vladimir Putin.

The Kremlin is treading lightly. The Putin administration, which went to great lengths to build a functioning regional partnership with Jerusalem following Russia’s intervention into the Syrian Civil War, has been hesitant to support any intervention or peace initiative that can be interpreted as outwardly hostile to Israel. At the same time, Russia-- in contrast to the United States and European Union--- does not recognize Hamas as a terrorist organization and has previously received delegations from the latter to discuss peace efforts. By dint of its regional clout and its credibility with both of the belligerents, Moscow sees itself as uniquely positioned to affect the reconciliation process between Israel and Palestine. Dmitry Maryasis, a member of the prominent Russian think tank Valdai Discussion Club, told Russian media outlet Lenta that Russia “enjoys friendly relations with both sides of the conflict. If Russia leverages these contacts correctly, it can bolster its position.”

Nevertheless, the Kremlin has neither the desire nor, arguably, the means, to take the initiative in formulating and imposing peace terms in Gaza. Instead, Moscow seeks to leverage its influence within the context of a broader peace deal brokered by a working group of great powers and international organizations. Russia’s Foreign Minister Sergei Lavrov called last week for an urgent meeting of the Middle East Quartet, composed of the United Nations, United States, European Union, and Russia, to resolve the Gaza crisis. “Today we've come to the common opinion that the most pressing task is to convene the Quartet of international mediators,” he said during a joint briefing with United Nations Secretary-General Antonio Guterres, adding that “we trust the Secretary-General as the coordinator of the quartet.” At a Russian Security Council meeting on Friday, Putin offered a stark assessment of Russia’s stake in the ongoing conflict: "I would like to ask my colleagues to comment on the current situation in the Middle East, I mean the escalated Palestinian-Israeli conflict – this is happening in the immediate vicinity of our borders and directly affects our security interests,” he said.

In keeping with its focus on multilateralism in the Middle East, Russia’s Foreign Ministry has proposed expanding the Quartet into a new “4+4+2+1” format; that is, the original four members, plus Egypt, Jordan, UAE, and Bahrain, plus Israel and Palestine, plus Saudi Arabia. The inclusion of the latter, explained Moscow, is based on Saudi Arabia’s 2002 Arab Peace Initiative (API) peace plan. Turkey is conspicuously missing from Russia’s new proposed format, perhaps a reflection of the fact that Moscow-- unlike Ankara-- is not seeking to impose a punitive peace on Israel. Turkey’s omission likewise comes amid simmering tensions over Ankara’s continued military support for Azerbaijan throughout the Second Nagorno Karabakh War. President Erdogan said earlier this week that Turkey will support Palestine as strongly as “Azerbaijan’s fight to liberate the occupied land of Nagorno-Karabakh,” adding that Turkey will not tolerate “Israel’s aggression” even if “the whole world turns a blind eye to it.”

As Moscow takes a scalpel to the complex process of Palestinian-Israeli reconciliation, it does so in continued consultation with Palestinian envoys. The Palestinian Ambassador to Moscow, Abdel Hafiz Nofal, has projected confidence that Russia can fairly convey Palestine’s interests to Israel. “Our Russian friends know our position,” Nofal said. “.... Russia defends our interests. And as my colleague, the Jordanian ambassador, has said, Russia enjoys a strong relationship with Israel, Russia can influence Israel.” Whether accurate or not, Nofal’s assessment can be interpreted as a hopeful sign for ongoing de-confliction efforts; the Palestinian side is more likely to come to the bargaining table and to accept the outcome of prospective negotiations if it believes its interests are being represented.