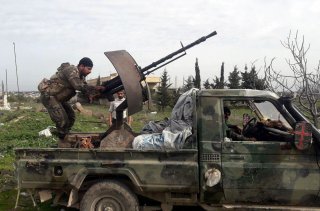 Here's What You Need To Remember: Virtually all the state actors in the region find it more expedient to remain locked in perpetual small-scale warfare than to take on the political risks of negotiating in good faith with their adversaries—a move which could delegitimize them with their own allies.

A terrifying pandemic may have the world in its grip, but it’s business as usual in the war-torn Middle East as Tehran and Damascus continue transferring weapons to proxies and Israel continues bombing them.

The latest strike took place on March 31, 2020 when Israeli jets crossed over into Lebanese airspace near Tyre (video here) and reportedly launched eight missiles that streaked towards central Syria.

The Syrian government’s SANA news agency reported air defenses had repelled the entire attack—but later conceded that some damage had been inflicted at an unspecified military facility. Video footage shows one missile hitting a ground target.  Other source claims two or three got through.

The Syrian Observatory of Human Rights reported the target was al-Shayrat airbase, adding “Reliable sources have informed SOHR that a cargo plane had shuttled between Al-Shayrat and T4 [AKA Tiyas] airports before Israeli strikes.”

The following day Breaking Defense ran an article by Israeli defense journalist Arie Egozi with commentary from an anonymous, “very senior” Israeli officials connecting strikes on March 5 and March 31 to efforts by Syria to rebuild its chemical weapons capabilities, and vowing that Israel would “…continue such attacks as more intelligence is gathered.”

If true, such production would contravene Syria’s accession to the Chemical Weapons Convention.

The Israeli Defense Force has carried out hundreds of airstrikes in Syria since civil war broke out there in 2011, targeting missile and artillery batteries, weapons deliveries, factories and command and control buildings used by Syria, Iran and Hezbollah (a Lebanon-based Shia militant group that has long been jointly sponsored by Damascus and Tehran).

Israel specifically seeks to prevent transfers of advanced rockets and missiles which could threaten targets in Israel and impede IDF airstrikes. It also objects to the growing presence of the Iranian Revolutionary Guard Corps in Syria on the border with Israel.

Syrian airbases are frequent targets because they are common transfer points for weapons from Iran and Russia. In many cases, Israeli strikes destroyed cargo on the tarmac shortly after it was unloaded.

The earlier Israeli strike on March 5 hit four sites: al-Shayrat and al-Dabaa airbases in Homs province, and two targets on the Golan Heights. Reportedly, the attack killed a Syrian government soldier and injured three others at Shayrat.

Three days later, article on Ynet News noted in passing: “An attack attributed to Israel last week near the city of Homs was reported to have targeted a chemical warfare facility and considered by foreign sources to be a warning to the Assad regime that Israel is aware of these efforts.”

While it’s plausible Syria might seek to discretely rebuild its chemical weapons capability, it’s important to note that officials have not yet furnished any publicly available evidence.

Despite the destruction of 1,300 tons of Syrian chemical weapons in 2013-2014, experts have long believed Damascus retained small quantities of deadly nerve agents and/or the capacity to manufacture more on a small scale.  Syrian forces also never ceased using chlorine bombs, the production of which cannot be regulated due to chlorine being a common industrial chemical.

This was confirmed on April 4, 2017, when a Syrian Su-22 jet based at Shayrat dropped bombs full of the nerve agent sarin on the rebel-held town of Khan Sheikhoun killing 80. The origin of the attack was confirmed by an investigation by the Organization for the Prevention of Chemical Weapons.

While Damascus’s record of using chemical weapons in the Syrian Civil War despite formally disavowing them has been repeatedly established, the anonymous claims by Israeli officials are not proof in and of themselves.

Military aviation writer Tom Cooper, author of several books on the conflict in Syria, he was skeptical that Israel had bombed a Syrian chemical weapons facility:

“Have heard such rumors, but find them only ridiculous. The Israelis haven't bombed even one of Assadist chemical weapon site, ever. They're bombing whatever IRGC bases they find (which isn’t much), instead.”

For now, though, the statements appear to be a threatening letter of intent warning of consequences if Syria proceeds down the path Israeli officials claim it is pursuing.

In fact, the message may be directed even more at Putin, who has worked out a peculiar working relationship with both Israel and Syria: he supplies Syria with weapons, but seemingly does not allow the more advanced S-300 air defense missiles to be used against Israeli jets routinely bombing targets in Syria.

Unfortunately, virtually all the state actors in the region find it more expedient to remain locked in perpetual small-scale warfare than to take on the political risks of negotiating in good faith with their adversaries—a move which could delegitimize them with their own allies.

For example, Syria’s reception or production of weapons ostensibly for fighting Israel may create a “political good”—being seen to support the objectives of Assad’s allies Hezbollah and Iran—even if they a fail to have much military impact on Israel.  When Israel destroys those weapons, it eliminates the material capability, but not the symbolic good, guaranteeing further attempted weapons transfers.

As a result, ongoing hostilities between Syria and Israel appear to be indefinitely sustainable.

Sébastien Roblin writes on the technical, historical and political aspects of international security and conflict for publications including The National Interest, NBC News, Forbes.com and War is Boring. He holds a Master’s degree from Georgetown University and served with the Peace Corps in China. You can follow his articles on Twitter. This article first appeared last April and is being republished due to reader interest.