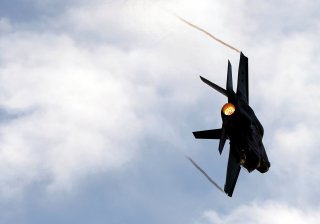 Here's What You Need To Remember: The modifications allow the F-35 to fit in better with Israel's existing defense portfolio. It is possible, though far from certain, that if the aircraft is substantially improved, the modified design could find its way back to the United States!

Caleb Larson is a defense writer for the National Interest. He holds a Master of Public Policy and covers U.S. and Russian security, European defense issues, and German politics and culture. This article first appeared last month.