Japan Is Thinking Past the F-35: It Has Big Plans for What Comes Next 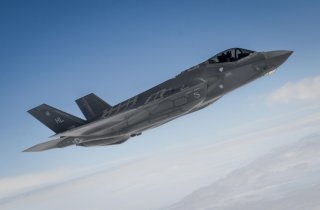 Here's What You Need to Remember: Japan’s defense industry had already envisioned playing a central role in the project, which is expected to cost tens of billions of dollars in a program that could last into the mid-2030s.

Last month Japan was poised to choose the United States as its partner to develop the successor to the F-2 fighter jet, but now the Japanese Air Self Defense Force has revised those plans and will instead develop the next generation fighter based primarily on domestic technologies.

Japan’s defense industry had already envisioned playing a central role in the project, which is expected to cost tens of billions of dollars in a program that could last into the mid-2030s. The Japanese government had been in talks with the United States and the United Kingdom since last summer—and this included American contractors Lockheed Martin and Boeing, as well as London-based BAE Systems. All three companies had been named as potential partners.

As of last month it looked as if the deepening defense cooperation between Washington and Tokyo would factor in Japan's decision. Additionally, Japan opted against working with the UK as primary partner, as it was felt that a three-way arrangement wouldn't allow the Japan-U.S. alliance maintain a technological edge.

“We will launch a Japan-led development project with the possibility of international collaboration,” a spokesperson from Japanese Ministry of Defense’s (MoD’s) Acquisition, Technology & Logistics Agency (ATLA) told Jane’s last month.

“The Japan MoD is in discussion with the United States and the UK from the viewpoint of ensuring interoperability, cost effectiveness, and technical reliability,” the ALTA spokesperson added. “We have been exploring the possibility of cooperation with these two countries.”

Now it seems that Japan will simply work without its western allies as it develops the sixth generation fighter with domestic technologies. That fighter, dubbed the “F-3,” will replace the F-2 “4+ generation” light platform that is currently utilized by the Japanese military. The contract for this next generation fighter is estimated at $40 billion.

Since World War II the Japanese military has only produced two major classes of combat aircraft including the F-1 attack jet that was loosely based on the British Jaguar; and the Mitsubishi F-2 lightweight multi-role fighter that was closely based on the American F-16 Fighting Falcon.

The Mitsubishi F-2, which will remain in service at least until the development of the next generation of aircraft comes on line, was jointly developed in the mid- to late-1900s and jointly produced in the early 1990s by Mitsubishi Heavy Industries (MHI), the prime Japanese contractor) and Lockheed Martin Aeronautics, principal U.S. subcontractor to MHI.

Without such partnerships the bulk of cost of the new fighter, including R&D, will be carried by the Japanese. This is no small amount.

The cost of each of the new F-3 fighters could exceed $185 million, and to help offset the development costs the Japanese could likely look to export the fighters. According to online reports, Japan's ruling Liberal Democrat Party has entered into discussions on the potential export of the future fighter.

This article first appeared in April of 2020 and is being republished due to reader interest.