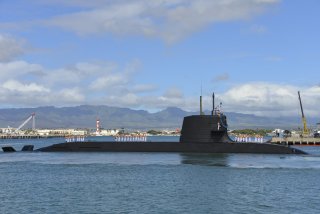 Here's What You Need To Remember: An LIB submarine’s underwater endurance may also not necessarily equal the multiple weeks an AIP-powered submarines is capable of. However, the greater battery life would give a submarine captain more flexibility on using more electricity for longer ultra-quiet stretches with the generators off, or for longer periods high-speed maneuvers. Overall, LIB alone may be more useful than AIP for submarines dispatched on short-range patrols.

Japan, therefore, has thrown a lot of money and years of effort into building greater safety and reliability into its sub-based lithium-ion batteries by implementing improved battery-cell matrices with hardened dividers, stabilized chemicals and automatic fire extinguishers, and has reportedly tested the configuration rigorously to account for various high-stress scenarios such as exposure to seawater. The launch of the Oryu suggests the Japanese military is satisfied that the lithium-ion batteries have been refined it into an operationally viable and safe capability.

Sébastien Roblin holds a Master’s Degree in Conflict Resolution from Georgetown University and served as a university instructor for the Peace Corps in China. He has also worked in education, editing, and refugee resettlement in France and the United States. He currently writes on security and military history for War Is Boring. This article first appeared last year and is being republished due to reader interest.