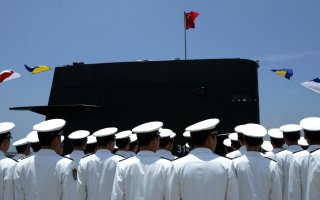 Here's What You Need To Remember: Unlike land-based ICBMs, SLBMs can be launched from subs can sail closer to the American mainland to put U.S. cities within range.

China has tested a new submarine-launched missile that can hit the United States.

The first flight test of the JL-3 missile was conducted in November from Bohai Bay in the Yellow Sea, according to the South China Morning Post, citing an unnamed source.

“The new missile has a flight range of about 9,000 kilometers (5,600 miles), which is less than the 12,000-kilometer (7,500-mile) range of the American Trident II and Russian Bulava submarine-launched ballistic missiles (SLBMs),” the Post reported. This would give the JL-3, which can be armed with multiple warheads, a range of about 500 to 1,000 miles greater than its predecessor, the JL-2.

The distance between Shanghai and Honolulu is about 4,900 miles, which would put Hawaii within range of Chinese sub-launched missiles, and about 6,100 miles to San Francisco and 7,400 miles to Washington, D.C. However, unlike land-based ICBMs, Chinese subs can sail closer to the American mainland to put U.S. cities within range. Though definite information on China’s missile submarine fleet is elusive, the Pentagon estimates that China now has four Jin-class subs with 12 JL-2 missiles apiece. These will be followed in the 2020s by the Type 096-class, which will be armed with the JL-3.

But China seems to be signaling that it doesn’t want to embark on an arms race with America. The South China Morning Post, based in the Chinese special administrative region of Hong Kong, cited several Chinese experts who said the missiles were intended as a deterrent and bargaining chip in China’s fraught relationship with the U.S.

“Beijing will only develop a small number of SSBNs [ballistic missile submarines] and submarine-launched ballistic missiles because its main focus is to make sure the PLA has the most effective and powerful second-strike counter-attack capability in the event that the country is hit by nuclear weapons,” one expert said.

Interestingly, the Post’s source suggested that Chinese sub-launched missiles have a shorter range than American or Russian models because of issues with China’s ballistic missile submarines. “The JL SLBMs have a shorter range because the Chinese military has so far failed to make any significant technology breakthroughs in developing nuclear-powered submarines,” the source said. Chinese experts also suggested that the JL-3 has yet to achieve full range.

If China could boost the JL-3’s range to 7,500 miles, like the Trident, then it could reach the entire United States from subs stationed in waters near the Chinese coast. China maintains Russian-style “bastions” where SSBNs can lurk under the protection of Chinese air and naval forces.

One Chinese expert said a missile that could hit the entire U.S. could be fielded within four years, as the Type 096 subs are deployed. Chinese land-based ICBMs already have sufficient range to do this.

With just an estimated 300 nuclear warheads compared to the approximately 7,000 fielded by both the U.S. and Russia, China’s nuclear arsenal is comparatively small. But even a few Chinese H-bombs could wreak tremendous damage to the United States.