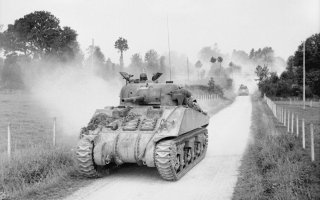 Here's What You Need to Know: Though the gun used some pretty unique ammunition, it lacked stopping power—an essential requirement for an anti-tank gun.

The advent of the tank in 1916 during the First World War spurred the development of anti-tank warfare. Large-sized landmines were a static defense that depended on successfully estimating what paths through no-man’s land tanks would use—a pure guessing-game. Field artillery was another possible solution, though getting big guns to accurately bear down on armor proved to be difficult. Something more mobile was needed—an anti-tank rifle.

During that war, the Germany Army took a page out of African big-game hunter’s books and started issuing the enormous T-Gewehr to troops as a stopgap measure for taking out British armor, making the T-Gewehr the world’s first anti-tank rifle.

Though the rifle was moderately successful at harassing or killing tank crews when initially issued, improvements in British and French armor later in the war made the T-Gewehr and its massive 13.2 millimeter TuF round obsolete. After Germany’s World War I defeat and the post-war restrictions imposed by the victorious allies via the Versailles Treaty, further development of both the T-Gewehr and the TuF round were halted.

In the 1930s, Germany went to the drawing board once again in hopes of creating a better anti-tank rifle. To that end, the 7.92×94mm round was used. The round itself was rather unique. Using a steel core, the round was intended to penetrate tank armor, though the bullet’s small diameter was unlikely to result in much damage to the tank.

Rather, the bullet was intended to make tankers evacuate. Just behind the steel core, a small tear gas capsule was incorporated into the bullet. If all went according to plan, the capsule would be deposited inside the tank, and the ensuing gas cloud would force the tank crew to bail.

It didn’t work as intended. The bullet had insufficient penetration power for all but the thinnest of armor, and the capsule could not reliably be delivered into a tank. Later rounds eliminated the capsule and exchanged the steel core for a tungsten carbide penetrator, improving somewhat better penetration.

The Panzerbüchse 38 and 39 were similar single-shot rifles, both built to fire the 7.92×94mm round. The improvements to the Panzerbüchse 38, an unwieldy 35-pound rifle, resulted in the lighter Panzerbüchse 39. Since the rifles were single-shot, two 10-shot cases were carried next to the breech to allow shooters to more quickly reload.

Regardless, both rifles lacked sufficient penetrating power, even with improved tungsten-carbide ammunition. Their shortcomings evident, the rifles were reassigned rifle grenade duty. In this capacity, the rifles could fire anti-personnel and both light and heavy anti-armor grenades using a purpose-built wooden bullet.

Though both the Panzerbüchse 38 and Panzerbüchse 39 had been produced in much higher numbers than their T-Gewehr predecessor, they were quickly made obsolete just a couple years after their introduction thanks to improvements in armor protection.