Just How Likely Is a Russia-India Naval Alliance? 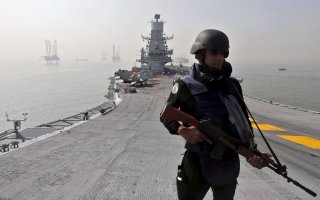 Here's What You Need to Know: Russia is trying to hedge its bets.

Just two weeks after the Indian Navy’s flagship aircraft carrier INS Vikramaditya took part in the second phase of Malabar 2020 joint exercises with the United States Navy, which also included drills with the navies of Australia and Japan, India warships took part in another exercise where it operated alongside the Russian Navy in the eastern Indian Ocean in a “passing exercise” (PASSEX).

The drills were aimed to increase the operational compatibility, improve mutual understanding and exchange advanced experience between two friendly navies, Indian Navy Spokesman Vivek Madhwal told Tass. Due to the still ongoing novel coronavirus pandemic, the ships reportedly only interacted at sea without personal contact between the sailors of the two nations.

The PASSEX was conducted between the two navies to ensure they are able to communicate and cooperate in times of war or humanitarian relief, and likely included the typical flashing light drills, semaphore drills and flag hoist drills. The Indian Navy also reported that during the drills the two navies also conducted joint measures, took part in exercises against underwater targets and in helicopter operations.

In addition to practicing cooperation, such exercises are also to “show the flag” and highlight the potential cooperation of the two nations. In this case, New Delhi has continued to show that it has many international partners—and that message was likely directed towards Beijing as the two nations continue their standoff in the Himalayan Mountains thousands of miles away from the exercise.

The Indian Navy participated in thirteen bilateral and multilateral exercises in 2020, The Hindu.com reported. This included the recent Malabar 2020, as well as a passage exercise with the U.S. Navy’s USS Nimitz Carrier Strike Group near the Andaman and Nicobar (A&N) islands in July and a more recent PASSEX with the Japanese Navy.

It is clear that just as India has tried to maintain close relationships with both Washington and Moscow, Russia too is trying to hedge its bets by working with both Islamabad and New Delhi.