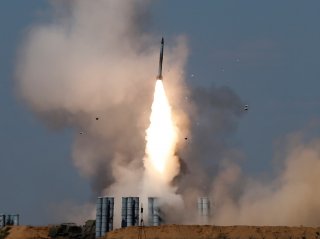 Here’s What You Need to Remember: Even if the U.S. Air Force was able to overwhelm or destroy the People’s Liberation Army Air Force, its aircraft would be at risk of being destroyed by China’s highly dangerous and precise air defenses.

Arecent Defense Department report shows that Chinese air defense systems present a substantial and growing threat to the U.S. and allies in the region. China operates Russian-built and indigenously produced systems capable of tracking and attacking enemy aircraft. The technological sophistication of these weapons systems, and the extent to which they can be upgraded, would naturally make it quite difficult for U.S. or allied countries to establish air supremacy over China in any kind of large-scale engagement.

The Defense Department published a report in 2021 titled Military and Security Developments Involving the People’s Republic of China. The report explains that China’s air defenses consist of Russian-built S-300 and S-400 surface-to-air missiles. These Russian systems are reportedly among the best and most effective in the world. Also, it is possible to upgrade them. The most recently produced S-400 missiles and emerging Russian S-500 missiles are networked together. This is made possible by high-speed computer processing capable of precise, long-range threat detection. These weapons systems have much greater range and sensitivity than previous weapons systems. However, an ability to detect that an aircraft is “there” or “in the sky” does not mean that the air defense radar system can establish a continuous “track” and succeed in striking, engaging or destroying an aircraft.

Also, China’s air defense threat is not restricted to Russian-built systems. The People’s Liberation Army Air Force supplements them with Chinese-made systems. China operates its domestically produced HQ-9 surface-to-air missiles. Also, China is developing indigenous HQ-19 missile systems, which will be able to counter ballistic missile warheads. Thus, any potential air attack over mainland China will require aircraft to operate at higher altitudes to avoid being detected by air defenses, use unmanned systems to search targets or use long-range land, air or ship fired ballistic and cruise missiles to destroy Chinese air defenses from safer stand-off ranges without placing manned aircraft in the line of fire.

Russian media reports indicate that their systems are capable of tracking and destroying stealth aircraft. But it’s unclear if that is true. Nonetheless, these air defenses are known to present serious challenges for some advanced U.S. aircraft, including some stealth platforms. What this means is that a U.S. led air-campaign over China would prove quite difficult. Even if the U.S. Air Force was able to overwhelm or destroy the People’s Liberation Army Air Force, its aircraft would be at risk of being destroyed by China’s highly dangerous and precise air defenses. Therefore, a strong maritime presence would be needed to support an offensive campaign. Should the Air Force find the location of air defenses, then long-range precision strike weapons—like Tomahawk cruise missiles—could be fired from ships or submarines to destroy Chinese air defenses. This might improve the prospect of a successful U.S. mission.