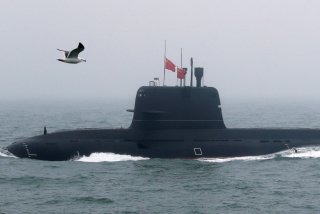 Here's What You Need To Remember: In 2018, Chinese scientists said they were developing a laser-equipped satellite that could detect submarines. The idea is to use laser beams of various colors that can detect disturbances in the water caused by a moving submarine.

The question is what will make these devices successful when previous efforts have fizzled. For example, in 2010, DARPA's Deep Sea Operations program sought to develop blue-light lasers for undersea communications and hunting subs. The problem is that orbital laser beams can be affected by clouds, murky water and fish, as well as being scattered in the water.

As for the Wuhan team’s new magnetic detection sensor, a bean-sized device far smaller than the magnetic anomaly detection (MAD) sensors flown by anti-submarine aircraft would seem to face limitations in power and range. Even some Chinese scientists contacted by the Post were dubious that the magnetic sensor could be useful without further development.

Michael Peck is a contributing writer for the National Interest. He can be found on Twitter and Facebook. This article first appeared in October 2019.