Let Us Tell You How China Would Invade and Conquer Taiwan 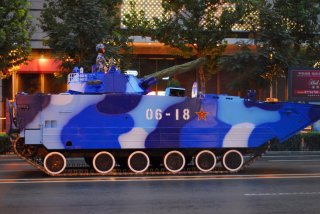 Here's What you Need to Remember: A Chinese analysis of Allied strategy at D-Day proves that Beijing is studying its history, and that could spell disaster for Taiwan.

A number of events and trends are coming together now to drive Taiwan and with it the whole Asia-Pacific region, to the edge of disaster. These include the recent election for Taiwan’s leadership, the unrest in Hong Kong, China’s increasing military might, and the downward spiral of contemporary U.S.-China relations. For sure, Taiwan has been at or near the center of U.S-China relations for the last seventy years, so at one level, there is nothing particularly new here.

For readers unfamiliar with Dieppe battle, this short, bloody engagement featured an amphibious “probe” by British and Canadian forces of German coastal defenses along the French coast of the English Channel during mid-August 1942. This Chinese analysis rightly characterizes the raid as a “complete defeat,” but extracts numerous lessons, as indeed the Allied commanders did too. First, it is assessed that “the forces were inadequate to risk such a decision [实力不足冒险决策].” The Allies in this engagement suffered from a paucity of warships, transports, tanks, artillery, and even infantry numbers that were less than their German adversaries. Trying to fight their way ashore straight into the teeth of Germany’s “massive air force shield” was bound to prove disastrous for Allied troops, according to this Chinese analysis, as Dieppe proved to be both “the wrong time and the wrong place” for an attack. A second lesson articulated in the Chinese article is, indeed, that “intelligence was poor causing operational blindness [情报不力盲目行动].” The account reports the Allied forces were surprised by unexpected defenses, such as a two-meter sea wall, minefields, and also German forces that were not anticipated to be in the area. Even the weather forecasts are reported in this Chinese rendering have been inadequately detailed.

With respect to Taiwan, one can safely assume both a massive PLA superiority in firepower and very close attention to the complex logistics problem. Thus, the only remaining challenge for Beijing is to create a proper ruse – admittedly somewhat difficult in the age of satellite reconnaissance. Yet, this is also not all too hard to imagine. Would Xi Jinping simply call his friend Vladimir Putin to ask for a decent-sized diversion in the Baltics? It should not be forgotten that Mao Zedong’s victorious military campaign against India in 1962 was accomplished with lightning efficiency under the “cover” of the Cuban Missile Crisis. The actual PLA assault on the “beautiful island” would come from both the sea and the air, of course, developing from multiple vectors simultaneously, allowing for the exploitation of the most promising fronts, and likely prompting rapid, total collapse.

The best way to prevent such a violent and shameful disgrace is to press Taipei into negotiations on forming a confederation with Beijing now. It was actually not so long ago that Taipei and Beijing leaders were chatting amiably at the first-ever Taiwan-China summit. “One country, two systems” may indeed be a kind of “ugly duckling” at this point, at least in the Western press, but that only remains true until the cataclysmic alternative is thoroughly understood.