Storm Clouds Are Gathering over the Taiwan Strait 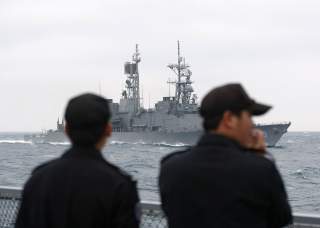 A few years ago, one could surmise that the Taiwan issue was all but resolved as cross-Strait relations and indeed integration were intensifying in all domains. These developments followed along quite organically after the historic achievement of the long-awaited three links, including direct air, postal and shipping routes. That momentous breakthrough seems a bit like a distant reverie today, unfortunately. When then candidate Tsai Ing-wen was feted in Washington, DC during the summer of 2015, that was probably a portentous harbinger that the island’s fate was again about to be pulled back into the vortex of deepening superpower rivalry.

Of course, there was the famous “phone call” of December 2016. I noted in this forum that, not long after the telephone conversation between Tsai and President Donald Trump, Beijing was taking the unusual step of brandishing its new DF-41 mobile, MIRVed ICBMs. The rift was seemingly healed, allowing the Mar-a-Lago summit a few months later, but since then a tense situation has become ever more precarious. There have been notions of a visit by a U.S. Navy warship to Taiwan. Most painful from Beijing’s perspective, Congress and the Trump administration seemed to have jettisoned all caution by passing the Taiwan Travel Law that encourages high-level engagement between Taiwan and U.S. officials. Indeed, a senior State Department official visited Taiwan in March. Moreover, the same day that President Trump met with Kim Jong-un in Singapore, a brand new and lavish facility (just $256 million) was opened for the American Institute in Taiwan (AIT), which China can only interpret as an “embassy” in all but name. As Beijing has rapidly sought to increase military pressure on Taiwan, deploying its navy and air force in ever more provocative demonstrations of force, China has also brought pressure to bear on U.S. companies to alter the way they referred to Beijing’s “wayward province”—a set of Chinese actions derisively criticized by the Trump administration as “Orwellian nonsense.” As duly noted by the Chinese press, two U.S. warships passed through the Taiwan Strait just a couple of weeks ago.

American strategists are once again coming to grips with the possibility of the eruption of a Taiwan scenario—one they had happily forgotten about in recent years. In doing so, they may want to consider the fate of another geopolitical tussle over a little island less than one hundred miles off the coast an angry superpower. During the Cuban Missile Crisis, nuclear weapons obviously had a prominent role, but the truly determinative advantages for the United States in that situation were two-fold: the very strong superiority of U.S. conventional military forces arrayed near the island, on the one hand, and the united will of the American people that viewed the Soviet deployments as a grave threat. Both these stark asymmetries allowed Washington to, more or less, have its way in the 1962 crisis. At root, both asymmetries resulted from favorable geography. Yet, in the case of the Taiwan scenario, China’s proximity (and America’s lack thereof) will mean that Beijing has vast conventional superiority and also the wide recognition that the island’s fate is a “core interest” that unites Chinese citizens behind the cause. To be sure, there is a decent probability of an apocalyptic (nuclear) world war resulting from the superpowers coming “eye ball to eye ball” in a test of wills over the fate of Taiwan. However, an even more likely result is actually a “Cuban Missile Crisis in reverse,” wherein Washington is forced to capitulate after ideological twaddle comes crashing against the harsh and unforgiving rocks of reality in the form of the actual military balance of power (where it matters).

It’s worth reviewing a few recent reports regarding China’s military buildup. These items have not been reported, for the most part, in the leading Western papers, such as the New York Times, that seem far too busy focusing on the latest turns in the Russia investigations to bother with the actual changing military balance in East Asia. These developments include, but are not limited to the tenth test of the DF-41 ICBM, deployment of the DF-26 “ship-killer” to active duty (to supplement the DF-21D), and the unveiling of the new DF-17 ballistic missile with a hypersonic warhead. The Chinese Navy seems to be on the cusp of delivering an acoustic breakthrough with electric drive for its submarine force, while the rather remarkable simultaneous launch of Type 055 cruisers (hulls three and four) was likewise ignored by most Western media outlets. Especially relevant to the Taiwan scenario, there is, of course, the massive buildup of the Chinese marine corps, and the announcement that China is already “beginning to build a new generation of amphibious attack ship [开始建造新一代的的大型两栖攻击舰艇],” the Type 075, that appears optimized to facilitate large-scale helicopter operations.

On the interesting topic of how attack helicopters operating from ships could impact the Taiwan scenario, it is likely not coincidental that the Chinese naval magazine Naval and Merchant Ships [舰船知识] took up this issue with gusto (six in-depth articles) in the March 2018 issue. As I noted in a 2016 piece in this forum on Chinese amphibious capabilities, Chinese military planners began working in earnest on this concept as early as 2014. But this latest issue indeed suggests the concept has taken root as a relatively simple way to put massive fire support “over the beach” and against Taiwan’s defenders. One photo accompanying the essays appears to show five Z-10 attack helicopters flying over the ocean on such an island strike training mission. Another illustrates how civilian ships [民船] could quite easily be reconfigured to support helicopters in this role. I have noted elsewhere that Chinese analysts studied the Falklands War example to see how civilian ships could support aviation in various ways.

For the Taiwan scenario, PLA analysts like that attack helicopters have “significant firepower [攻击能力强],” as well as high mobility. Helicopter aviation is contrasted with fixed wing platforms that “are dependent on runways. But runways take a long time to build, are expensive, and are among the very first targets in modern warfare. [依赖机场; 而机场建设周期长, 费用高, 在现代战争中是攻击的首要目标之一].” It is noted, moreover, that helicopters often fly below one hundred meters and can even operate below ten meters, making them very difficult to detect. Thus, they are said to “increase the surprise aspect of an attack [曾加了攻击的突然性].” Not only are helicopters said to be able to mobilize quickly from distant locations (again undergirding surprise), but they can operate forward or close to the battlefield from spontaneous oil and ammunition supply depot areas. In other words, they could be sent relatively early into an amphibious lodgment on Taiwan, helping to offset a deficiency in heavy armor, for example. The article implies that putting PLA ground force attack helicopters aboard ships could “produce a 1+1>2 result.” Speaking of heavy armor, a fold out in the same March 2018 issue of Naval & Merchant Ships shows a cutaway of a large Chinese commercial ferry reconfigured for military transport and thus loaded to the gills with military vehicles, including heavy tanks. Maybe it’s not surprising that, according to a mid-2017 issue of Ordnance Science and Technology [兵工科技] China is also studying the use of “Mulberry” type docks of WWII fame for rapid offloading of vehicles across difficult beach terrain or inhospitable coastline.

Despite such ominous preparations underway, a new study published in the journal International Security, authored by Michael Beckley, makes the unconventional claim that China’s threat to invade or coerce Taiwan amounts to a paper tiger that can be rather easily repelled by Taiwan with perhaps just a small bit of assistance from the United States. There are some significant insights in the piece, to be sure, and I’m honestly extremely sympathetic to the author’s overall recommendations regarding “decreasing the number of U.S. forces near China’s borders” and moving away from offensive doctrines that could result in “rapid escalation . . . [and potentially] disaster.” Still, the analysis of the Taiwan scenario here is badly flawed and rather full of misleading claims, unfortunately. The author, for example, suggests that it’s not such a big problem if China craters the runways at Taiwan’s air bases, since Taiwan’s air force is prepared to operate from civilian airports or even highways. He does not explain why Chinese missiles or rocket artillery (supplemented by satellite and drone reconnaissance) could not rather easily put the civilian airports and highway “bases” out of action too. In one of the more surreal passages of any Taiwan scenario analysis this writer has encountered, it is related that Taiwan actually has offensive forces to bring into the fight, including howitzers on Jinmen and Mazu, as well as “several thousand special operations troops embedded on the mainland that could blitz Chinese bases.” Such claims are either irrelevant (in the case of the former) or highly speculative and completely unverifiable (in the case of the latter). In the next paragraph, the author makes the altogether strange observation that Taiwan’s air force would survive and fight just as the Iraqi Air Force survived the Allied onslaught in the Persian Gulf War. That analogy hardly would seem to support the author’s case.