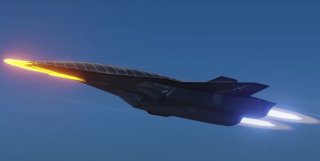 Here’s What You Need to Remember: Despite the progress that has reportedly been made, concrete development and production timelines remain elusive. Lockheed said in late 2018 that an SR-72 prototype will fly by 2025, with the aircraft possibly entering service into the 2030s.

Rumored to eventually be the world’s fastest plane, Lockheed Martin’s mysterious SR-72 could revolutionize flight as we know it.

The legendary SR-71 Blackbird, a fifty-seven-year-old reconnaissance plane that still holds the title of fastest manned airbreathing jet engine aircraft, was retired by the U.S. Air Force in 1998. In the late 2000s, rumors emerged that Lockheed Martin was working on a successor to the Blackbird. In 2013, an influential piece by Aviation Week’s Guy Norris provided fresh insights into Lockheed Martin’s ongoing Skunk Works development of a Blackbird successor: the SR-72, or “Son of Blackbird.”

The SR-72 is envisioned as an unmanned, hypersonic, reusable reconnaissance, surveillance, and strike aircraft. The latter role is among the new fighter’s key upgrades. Whereas the original Blackbird carried no armaments at all, the SR-72 will reportedly support Lockheed Martin’s upcoming High-Speed Strike Weapon (HSSW). The SR-72’s combat capability could be a potent tool for delivering high-precision strikes against in threat environments deemed too risky for slower, manned fighters. Capable of traveling at a staggering top speed of Mach 6 or 4603 miles per hour, the SR-72 is roughly twice as fast as the original Blackbird. The new aircraft can also reportedly take off much faster than its notoriously slow-to-start predecessor, potentially a major operational boon in rapid-response scenarios.

But the technologies required to realize a product this ambitious and forward-looking were not sufficiently mature in 2013, slowing down the project by several years. That is now no longer the case, according to top Lockheed Martin officials.  “We’ve been saying hypersonics is two years away for the last 20 years, but all I can say is the technology is mature and we, along with DARPA and the services, are working hard to get that capability into the hands of our warfighters as soon as possible…” Rob Weiss, Lockheed Martin’s executive vice president, and general manager for Advanced Development Programs, reportedly told Norris several years ago.

Weiss’s account was corroborated by Lockheed Vice President Jack O’Banion at an event in 2018. “Without the digital transformation the aircraft you see there could not have been made. In fact, five years ago, it could not have been made,” said O’Banion, referencing an SR-72 rendering presented at the American Institute of Aeronautics and Astronautics’ annual SciTech Forum. “We couldn’t have made the engine itself—it would have melted down into slag if we had tried to produce it five years ago,” O’Banion added. “But now we can digitally print that engine with an incredibly sophisticated cooling system integral into the material of the engine itself, and have that engine survive for multiple firings for routine operation.”

Despite the progress that has reportedly been made, concrete development and production timelines remain elusive. Lockheed said in late 2018 that an SR-72 prototype will fly by 2025, with the aircraft possibly entering service into the 2030s.