Low Tech, But Impactful: The Molotov Cocktail Is a Protestor’s Secret Weapon 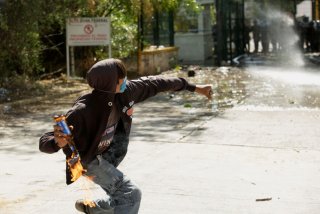 The Molotov Cocktail is a relatively new development in the field of military technology, though it is a decidedly low-tech weapon. Although there are many variants of the cocktail, they all follow essentially the same formula: a glass container, usually a jar or bottle, filled with a flammable liquid (often gasoline), to which a scrap of cloth is attached. Before throwing, the cloth scrap is lit, creating a fireball when it lands.

The cocktail owes its name to sarcastic Finns. During the 1939–1940 Winter War, Finnish soldiers and citizens mocked the Molotov-Ribbentrop pact signed between the Soviet Union and Nazi Germany. Attached to the pact was a so-called secret protocol that stipulated where Germany and Russia’s spheres of interest were. Finland fell squarely into what the Kremlin considered a part of their sphere of interest.

According to Soviet state propaganda, the initial assault on Finland was described as a humanitarian mission. Rather than bombs, the Soviet public was told that food was being dropped to the Finnish people to alleviate their suffering. These Soviet munitions, which were incendiary in nature, were sarcastically called “Molotov’s bread baskets.”

The Finn Army, badly outmatched by the Soviet Union’s war machine, resorted to manufacturing a number of homemade weapons with which to defend themselves. One of these was the petrol bomb, which the Finns thought paired well with the bombs from their Soviet neighbor. The Finns dubbed it “Molotov’s cocktail.”

The deadly bomb varied widely in its size and contents. One of the ways in which the mixture was made more deadly was by adding thickening agents like tar, resin, or heavier kerosene to the flammable mix. This allowed flames to adhere to clothing and vehicles, rather than dripping off and made the weapon more effective.

The manufacturing process was standardized by a heroic spirits distillery during the war. Rather than brewing liquor for human consumption, the Rajamäki distillery made a mixture for human destruction. A strong mixture of gasoline, ethanol, and tar were bottled into bottles the size of wine bottles, and long, thick matches were tied to the sides of the bottle, more reliably setting off the mixture when it broke against Soviet tanks or the ground.

Molotov Cocktails are not limited to the battlefields of World War II. During the Battle of Fallujah, American Marines reportedly created their own unique cocktail using one part liquid laundry detergent and two parts gasoline, presumably in glass containers. These homemade cocktails were used to clear rooms in the bitter house-to-house fighting that define the battle.

As recently as last year, Molotov Cocktails were seen during the Hong Kong protests. Anti-government demonstrators used the homemade bombs to destroy buildings and to keep the police at bay.