The M1 Abrams Is Nearly 40 Years Old. How Much Longer Will it Serve? 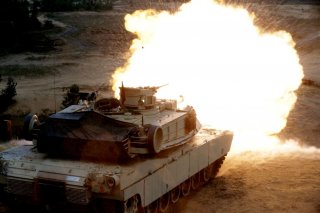 Here's What You Need to Know: The Abrams tank can continue to bring an unparalleled advantage to the battlefield, especially once it is upgraded with artificial-intelligence-capable systems, an ability to operate drones, and an instant capacity to receive, aggregate, and analyze incoming sensor data.

It may have emerged as one of the Army’s big five new weapons systems in the 1980s, but today’s M1 Abrams Main Battle Tank is an entirely new vehicle. Given its longevity, some may wonder if it has reached the end of the line in terms of upgrade potential? The answer seems to be no, in large measure due to the series of aforementioned factors such as high-speed computing, long-range thermal sights, ammunition data links, and perhaps most of all, the impact of artificial-intelligence-capable technologies. Apart from a few external design configurations related to things like the vehicle chassis, turret, and 120-millimeter cannon, today’s Abrams is an entirely new vehicle when compared with its inception, or even a few years ago.

For example, the existing v3 variant and fast-emerging v4 introduce paradigm-changing technologies capable of impacting the tactics of the Abrams tank to a substantial degree. The Abrams tank will operate with the ability to attack at longer ranges, control unmanned systems, integrate new generations of survivability-enhancing Active Protection Systems, and gather, analyze and transmit targeting data and other vital information in seconds. This changes combat. Some people may recall the now-famous Gulf War tank battles, which were in large measure won with advanced thermal sights. U.S. Army Abrams tanks were able to see and destroy Iraqi T-72 tanks before they were seen themselves, allowing them to attack and hit enemy tanks without facing incoming attacks. Advanced Abrams tanks take this kind of technology to yet a much greater, paradigm-changing level in terms of range, image fidelity, and ability to track multiple targets at once and draw upon artificial-intelligence-enabled target analysis.

Moving into the future, the Abrams tanks will be able to possibly operate smaller, faster, armed robotic vehicles moving ahead to enemy contact while receiving and analyzing real-time video feeds and data from overhead drones and even surveillance planes. In that future, artificial-intelligence-empowered computer systems can instantly perform analyses to pair sensor-to-shooter and tell human decisionmakers which weapon, counterattack, or operational response is best suited to the specific conditions of a given combat circumstance. This was already demonstrated last year during the Army’s Project Convergence exercise.

Let’s say there was a drone attack coming from an urban area or enemy infantry moving through a friendly population. An artificial intelligence system would discern all of these variables, factors in weather, geography, potential impact to civilians, and compare it against an established database. The computer database will not only be able to bounce new variables off of what has worked in the past for similar scenarios but, for example, potentially recommend a non-kinetic solution such as an electronic warfare system to jam a drone or laser to pinpoint approaching enemy vehicles to reduce explosive fragmentation and limit damage to civilians. A human decision maker can then be informed of an optimal method of attack, based upon a massively integrated, yet immediate computer analysis.

All of this means that the Abrams tank can continue to bring an unparalleled advantage to the battlefield, especially once it is upgraded with artificial-intelligence-capable systems, an ability to operate drones, and an instant capacity to receive, aggregate, and analyze incoming sensor data.

These advantages for the Abrams tank are fortified by a large number of current and ongoing upgrades to the Abrams tank v3 and v4 variants. These include several things such as ammunition data link, auxiliary power units to support a huge increase in computing, electronics, and on-board power, multi-purpose, programmable ammunition able to function as a High-Energy Anti-Tank round, sabo round, kinetic energy round, or canister round as needed. This reduces the logistical footprint and massively increases lethality. This kind of tactical approach, performed by an Army artificial intelligence system called Firestorm during Project Convergence, emerged due to the instant organization and analysis of data from mini-drones, satellites, ground vehicles, helicopters, large drones, and even dismounted infantry at one time.

A decision-making process made exponentially faster, reducing an attack time from twenty minutes to twenty seconds “can give a strategic advantage to even a much smaller force,” Maj. Gen. Ross Coffman, the director of the Next Generation Combat Vehicles Cross-Functional Team for Army Futures Command, said in an interview.