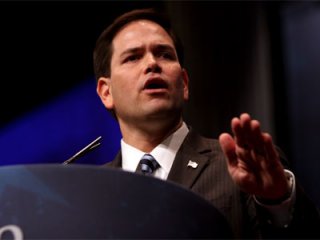 Here's What You Need to Remember: The Taliban did obtain other U.S. hardware including night-vision goggles, body armor, helmets, and uniforms as well as upwards of 2,000 armored vehicles.

Florida Republican Senator Marco Rubio told Fox News’ Sean Hannity on Tuesday that the Biden administration essentially “donated” an air force to the Taliban this month. The insurgent group, which regained control of the Afghan capital of Kabul last week, has captured vast quantities of U.S. military equipment that had been provided to the Afghan military.

Instead of using it to maintain control of their country, the Afghan Army collapsed, leaving the equipment to be snatched up by the Taliban. A July report from the Inspector General for Afghanistan Reconstruction listed 23 A-29 ground attack aircraft, 45 Black Hawk helicopters, 50 MD-530 helicopters as well as dozens of drones.

Rubio said that the first reason was the failure of the Biden administration to anticipate what they should have known would happen. It has been reported that President Joe Biden had been repeatedly warned by multiple U.S. intelligence officials and seemed to ignore it.

“What the red lights were flashing the whole time,” Rubio explained. “That the Taliban was moving faster than they were talking, and the whole time they were oblivious to it, it seems.”

The second failure, Rubio added, was in the “botched” evacuation, which allowed the Taliban to capture the aforementioned U.S. military hardware.

“This is the way the process should have worked, OK? What Joe Biden should have said is, ‘We have these people and we have this equipment, and we're going to get it out of Afghanistan, and we’ll leave once we have all that stuff, and anyone that gets in the way – including the Taliban – who tries to stop us, you will die if you get in our way.’ Not August 31, not September 1, not August 29 - not a date. A goal,” explained Rubio, adding, “The goal is we're going to get out Americans, we're going to get out the people that work for us, and we're not going to leave the Taliban an air force. We just donated an air force to the Taliban.”

The exact number of aircraft in Taliban control isn't exactly known, but at least some of the aircraft may be in Uzbekistan or another neighboring country. Many of the trained Afghan pilots fled their homeland in the aircraft. While it isn’t clear what might happen to those aircraft, it is extremely unlikely they'll be returned to the United States, but at least they won't fall into the hands of the Taliban, Al Qaeda, or ISIS.

However, the Taliban did obtain other U.S. hardware including night vision goggles, body armor, helmets, and uniforms as well as upwards of 2,000 armored vehicles. In one campaign the insurgent force has been transformed to a modern fighting force with equipment to rival that of the U.S. military.

This article appeared earlier this year and is being republished due to reader interest.