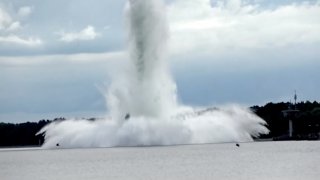 Here's What You Need to Remember: According to the Polish Ministry of Defense, the Tallboy that was just decommissioned is the largest unexploded ordnance ever disposed of in Poland. Like a number of European countries that had front lines on their territory during the war, Poland still regularly defuses hundreds if not thousands of bombs each year that lie in wait, unexploded.

The lieutenant commander of the 8th Coastal Defense Flotilla, G. Lewandowski explained in a Tweet that “the deflagration process turned into detonation. The object can be considered neutralized, it will not pose any more threat to the Szczecin-Swinoujscie shipping channel.”

Caleb Larson is a defense Writer with the National Interest. He holds a Master of Public Policy and covers the United States and Russian security, European defense issues, and German politics and culture.