Master Plan: How China Aims to Crush the U.S. Air Force in a War 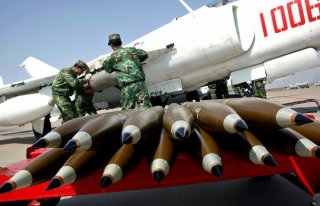 Here's What You Need to Remember: In opting in wartime to confront the U.S. Air Force's fighter squadrons in direct fights with similar aircraft and training, the Chinese air force is betting that it can develop better fighters and pilots faster and in greater quantity than the Americans can do.

The Chinese air force aims not just to compete with the U.S. Air Force, but to defeat it. All in pursuit of a uniquely Chinese strategy. To do so, Beijing's air arm buys technology where it can, steals or copies or it where it must and innovates new tech where there's nothing available to buy or steal.

That's the conclusion of a new study by Scott Harold, an analyst for the California-based think tank RAND.

Harold's study could help to cue American military planners to U.S. forces' vulnerabilities in a war with China, as well as to China's perceptions of its own weaknesses.

"The [People's Liberation Army] seeks to compete with the U.S. military not as a goal in and of itself, but rather as a means to achieving the political goals that the Chinese Communist Party sets for the PLA—goals defined by the CCP’s threat perceptions and policy ambitions," Harold writes in "Defeat, Not Merely Compete: China’s View of Its Military Aerospace Goals and Requirements in Relation to the United States."

Harold lists the Chinese air force's strategic goals as: the defense of Chinese airspace, the prosecution of a conflict over Taiwan and the projection of power in the East and South China Seas inside the first island chain in order to prosecute claims to disputed land features and maritime spaces.

To achieve these goals, Beijing's air arms relies on new and old technology -- some that the Chinese government legally acquired or developed on its own, others of which it copied or stole.

"Chinese military aerospace power is a mix of legacy capabilities derived from the Cold War era; hardware procured from Russia and Ukraine; copies and knock-offs of Russian airframes produced by kit or through reverse-engineering; a small but growing number of fourthand fifth-generation fighter-bombers that appear to have been developed based in part on stolen designs for U.S. airframes; advanced, but nonstealthy, ballistic and cruise missiles; and a growing, largely indigenously developed portfolio of space and antispace capabilities," Harold writes.

For example, Chinese aerospace firms purchased, then copied, Su-27 fighters from Russia. "After receiving such technologies, sometimes in limited quantities, China has often sought to reverse-engineer them to produce them indigenously, a process Chinese analysts today describe as 'IDAR,' or 'introduce, digest, absorb and re-innovate.'"

"When foreign purchases are not an option," Harold continues, "China has generally sought to steal foreign technology designs or observe foreign practices with an eye toward copying and adapting them to suit the PLA’s needs."

Perhaps most notably, Chinese hackers have stolen data related to the United States' F-35 stealth-fighter program. This information might have influenced the development of China's J-20 and J-31 stealth fighters.

Copying and stealing are expedients. "When purchase or stealing/copying are not feasible, China has sought to innovate solutions to its military problems," Harold explains.

China for example is a world-leader in hypersonics technology. And for good reason. Chinese leadership decided that super-fast munitions are uniquely valuable to the country's defensive anti-access strategy, which aims to prevent U.S. forces from operating near to China in order to, say, help to defend Taiwan from Chinese attack. No other country -- not even the United States -- invests in hypersonics to extent that China is doing.

Likewise, the Chinese air force essentially ignores whole classes of technology that it has decided do not suit its main missions. "China has not chosen to put money into space-based satellites for ballistic missile early warning [the way the United States has]," Harold quotes an expert as saying.

Understanding the Chinese air force's approach to technology can help the U.S. Air Force to plan its own means of defeating the Chinese air arm in battle, Harold explains. "A deeper knowledge of China’s military aerospace strengths and weaknesses can help steer the USAF away from areas in which China has robust capacity and toward areas where its weaknesses could be better exploited." 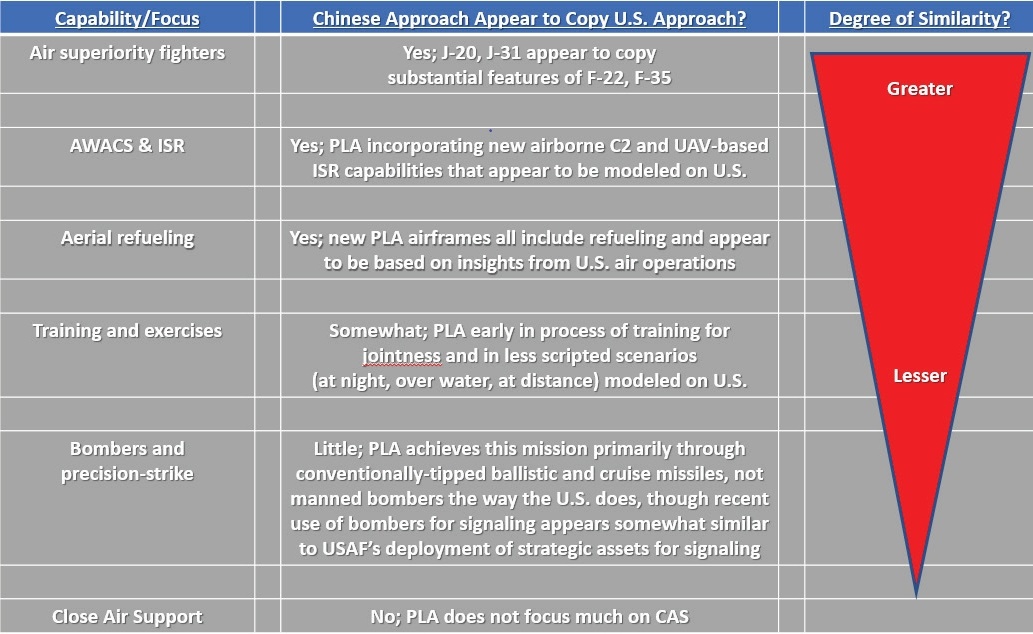 For instance, the Chinese air force most directly copies the U.S. Air Force when it comes to fighters and fighter operations. The U.S. Air Force fields a "high-low" mix of many multi-role F-16s and F-15s and, at present, somewhat fewer specialized F-22 and F-35 stealth fighters.

Similarly, China is deploying large numbers of conventional J-10 fighters -- which some analysts claim Beijing based on Israeli technology -- alongside a few stealthy J-20s.

The U.S. Air Force emphasizes realistic training in war-like conditions. The Chinese air force has begun organizing its own training along the same lines. The implication is that China intends to wage an air-superiority campaign roughly the same way the United States does -- and is planning to defeat the U.S. Air Force on the U.S. Air Force's own terms.

By contrast, in space the Chinese seem content to let the Americans deploy more and better surveillance satellites. Instead of racing the United States in space, China is building obstacles to the Americans' solo race -- in the form of anti-satellite weapons for which the U.S. Air Force has no equivalent. If China actually were to use these weapons, they could scatter debris across low orbit, denying easy access to space to every country, including itself.

The implication is clear. "For the foreseeable future, China will not need space the way the [United States] does," one expert told Harold.

But China's choices could present opportunities to U.S. forces. In choosing not to develop a space-based surveillance system, China has no back-up in the event that U.S. force succeed in defeating air-, land- and sea-based sensors through destruction, jamming or stealth.

In opting in wartime to confront the U.S. Air Force's fighter squadrons in direct fights with similar aircraft and training, the Chinese air force is betting that it can develop better fighters and pilots faster and in greater quantity than the Americans can do.

But despite the explosive growth of the Chinese aerospace industry since the late 1990s, in 2018 American companies still produce more -- and more different types of -- fighter aircraft.

China's Chengdu Aircraft Industries Group reportedly has produced around 20 J-20 stealth fighters since the type first flew in 2011. The U.S. Air Force alone possesses around 180 F-22 and 200 F-35 stealth fighters and continues to acquire new F-35s at a rate of around 40 per year. The air force plans to ramp up F-35 production to 60 annually starting in 2024.