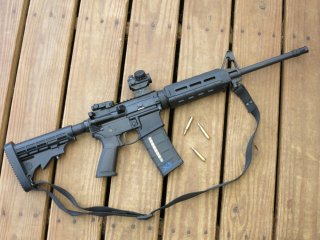 Here's What You Need to Remember: Pistols are not regulated by barrel length. That having been said, pistols do not have buttstocks and are typically not fired from the shoulder. The Bureau of Alcohol, Tobacco, and Firearms however recently declared arm braces on AR-15 “pistols” are in fact legal, even when the “braces” are incidentally capable of firing  (though not comfortably) from the shoulder.

The modular nature of the AR-15 platform, which allows the same operating system to drive guns of different calibers, barrel lengths, and other special features, has recently spawned a new subclass of the genre: AR pistols. Ruger’s AR-556 pistol, a short-barreled AR-15 designed for one or two-handed operation, delivers rifle-level performance in a pistol-sized configuration.