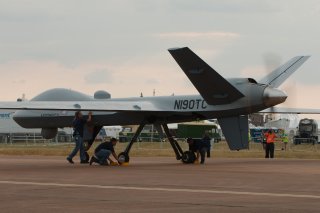 Here's What You Need To Know: The advantage of using small, cheap, and expendable combat drones is obvious—potential cost advantages are enormous, in terms of both maintenance, and the reduced risk to airmen’s lives.

General Atomics, the American drone manufacturing heavyweight, briefly showcased a new drone in their development pipeline via tweet. The small, compact drone, called the Sparrowhawk, has some pretty unique features.

According to General Atomics, the Sparrowhawk is a Small Unmanned Aircraft System and is designed as “an airborne launch and recovery demonstrator aircraft,” intended to be carried and recovered by a mothership, be it another larger drone or a different aircraft.

Though not yet in full-rate production, some of the Sparrowhawk’s features are unlikely to change, namely the small drone’s foldable wings. When attached to wing pylons, the entire body rotates 180 degrees for a more aerodynamic flight profile while in flight.

General Atomics states that the Sparrowhawk builds on the Gremlins Program, a DARPA initiative. The secretive program envisions “launching groups of UASs from existing large aircraft such as bombers or transport aircraft—as well as from fighters and other small, fixed-wing platforms—while those planes are out of range of adversary defenses.”

DARPA further explains that “when the gremlins complete their mission, a C-130 transport aircraft would retrieve them in the air and carry them home, where ground crews would prepare them for their next use within 24 hours.”

The advantage of using small, cheap, and expendable combat drones is obvious—potential cost advantages are enormous, in terms of both maintenance, and the reduced risk to airmen’s lives.

General Atomics is perhaps best known for its Reaper and Predator drones, both of which became linchpins of the United States’ overseas combat missions. But, those two workhorses have grown somewhat long in the tooth, necessitating replacement platforms. And General Atomics has been on a building spree as of late.

In addition to the Sparrowhawk, General Atomics also recently showcased their latest drone, which seems to have some powerful attributes. A glance at the artistic rendering the company released indicates that this drone will also be a change for the company, which has no previous experience with stealthy drone designs.

The flying wing design is likely to be very stealthy. The company has also offered tantalizing hints about the drone’s capability, particularly in regard to the propulsion system, which General Atomics claims will offer very long loiter times.

General Atomics, considered by many to be the granddaddy of drone designs has a few tricks up its sleeves yet. Stealthy drones, drones carrying other drones—the sky is quite literally the limit.