Meet the T-26: This Soviet Tank Helped Stop Hitler in His Tracks 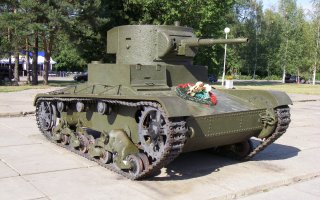 When Nazi Germany invaded the Soviet Union, it expected to face an antiquated military and the complete collapse of the Red Army before winter would set in. Much has been written about how the Germans were surprised that the Soviet Union fielded a variety of new and impressive weapons, most notably the T-34 medium tank. However, it wasn’t actually that (now famous) tank that helped save the day as the T-34 was still only coming into service at the start of the invasion.

Rather in the summer of 1941 it was the T-26—a light infantry tank that had already proven successful in the Spanish Civil War (1936-39)—that helped slow the German advance. While the T-26 was essentially obsolete and outclassed by German armor, the Soviets had the tank in great numbers.

It has been described as the “illegitimate offspring” of the British Vickers Mark E light tank, which was produced for the export market. The Soviets clearly used that as a launching pad for their own design, but as it was refined the T-26 took on its own unique characteristics.

As the Soviets sought to modernize its military infrastructure in the 1930s, the T-26 became the most produced in the world. This was due in part because it was far less sophisticated than contemporary models, which made it ideally suited for mass production. By 1939 more than 10,000 had been produced and in the early stages of the war the Germans were overwhelmed in terms of tanks by a ratio of four to one.

Throughout the 1930s, the Soviets also developed more than fifty variants, some more effective than others. While the twin-turret model didn’t turn out to offer “twice” the tank, others such as the flame-thrower tanks and even a remote-controlled version served to highlight how adaptable the T-26 platform could be.

A total of 281 T-26s were supplied to the Republican forces in the Spanish Civil War, and the T-26 proved to be superior to the German and Italian light tanks employed by the Nationalist forces. However, tanks in general still were vulnerable to infantry, and the Soviet advisors used the experience gained to improve Red Army tank warfare doctrine, which proved so valuable in the war to come with Germany.

The T-26 was used to great success during the Battle of Khalkhin Gol in 1939 against the Japanese, and again during the Soviet’s invasion of eastern Poland in September 1939, but it fared poorly during the Winter War with Finland in late 1939 and early 1940. That was attributed to poor infantry and tank coordination and resulted in the capture of many tanks, which were then used by the Finns.

With 10,268 in service, the T-26 was the most numerous tank of the Red Army when Germany invaded in June 1941. Outclassed by the newer German Panzer III and Panzer IV, the Soviets still had numerically superiority and that contributed to slowing the German advance.

As the T-34 entered service, the T-26 was gradually replaced, yet it still saw service during the Battle of Moscow, the Battle of Stalingrad and the Battle of the Caucasus. Elements of the Red Army even used the T-26 on the Leningrad Front in 1944. In addition, more than 1,200 were employed in the Operation August Storm offensive against Japan in Manchuria in the summer of 1945. It was the last time the tanks were employed in combat in such significant numbers.

It may have been the most numerous Soviet tank at the start of World War II, but less than fifty have survived, and are in museums in Russia as well as Finland, with one is at the Turkish military museum in Istanbul and another at the Tank Museum in the United Kingdom.