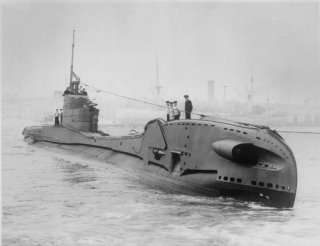 Here's What You Need to Remember: The T-class went on to serve mostly in the Mediterranean, where British ports at Gibraltar and Egypt mean that the long-range subs could stay supplied for much longer than their Axis counterparts, though the subs had a difficult time hiding from enemy attack in the clear, shallow Mediterranean waters.

During the inter-war years before the outbreak of World War II, the British Navy assumed they would eventually have to hunt down Japanese surface fleets in the Pacific, far away from the home islands. Though all naval designs after World War I were hampered by treaty restrictions, the T-class design attempted to combine very long range and endurance with a high weapons loadout.

Naval planners assumed that long-distance British submarines would have a very hard time attacking Japan’s capital ships—aircraft carriers and battleships—as they would be defended by smaller destroyer escorts. In order to get through these escorts, British submarines would have to unleash a large opening torpedo salvo to ensure enough destroyers were sunk or damaged, as torpedoes of the time were inaccurate, and opening shots would be taken from long distances.

The T-class, therefore, had a large protruding bow to accommodate the large number of torpedoes naval planners anticipated they would need. A number of modifications and improvements were incorporated into the T-class design throughout the war, resulting in a high amount of variation between individual hulls.

The entire T-class also came with a 4-inch deck gun forward of the sail with which to attack enemy surface ships. This gun fired a 35-pound shell and was not fixed to the deck, but could be rotated somewhat to fire on targets at either side of the submarine.

Interestingly, some of the T-class built prior to the Second World War were outfitted with engines designed by the Bavaria-based MAN manufacturing firm. Once hostilities broke out, MAN stopped providing maintenance support, which degraded the engine’s performance.

The unserviced engines were so unreliable that T-class subs with MAN-designed engines were prevented from going out on patrol. The domestically-manufactured British engines proved to be more or less satisfactory, though some were improperly protected from vibration and shock damage.

The T-class’ first combat engagement was inauspicious. An unresponsive British sub off the coast of Norway was mistaken for a German U-Boat and fired upon. It was sunk, with only two hands surviving.

The T-class went on to serve mostly in the Mediterranean, where British ports at Gibraltar and Egypt mean that the long-range subs could stay supplied for much longer than their Axis counterparts, though the subs had a difficult time hiding from enemy attack in the clear, shallow Mediterranean waters.

After the war, the T-class’ role was changed to hunting Soviet submarines. For that mission, the T-class was modified for better underwater characteristics and had their deck guns removed and the sail design was smoothed. The last of the class was operated by the Israeli Navy until 1977 when it was decommissioned.