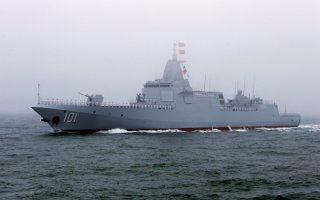 Here's What You Need to Know: These Chinese destroyers display a hybrid blending between a stealthy USS Zumwalt and an armed Arleigh Burke-class destroyer.

(This article first appeared in March 2021.)

In March, China launched its new stealthy Type 055 Destroyer into the Sea of Japan in what appears to be a provocative show of power through the Tsushima Strait, calling attention to its ambitious plan to deploy a quasi-stealthy warship while also doubling the sheer size of its fleet of destroyers over the course of the next five years.

The new destroyer, called the Nanchang, is reported in Chinese newspapers as having an ability to fire anti-ship missiles, surface-to-air missiles, anti-submarine missiles, and even some land-attack missiles, all while operating with some measure of radar eluding capacities.

The bow of the ship does appear to incorporate a blended hull-body with curves designed to deflect radar pings away from the ship and therefore not generate any kind of return rendering. The Nanchang also has a smoother exterior and, perhaps even more notably, it has no protruding deck masks and very few deck-mounted weapons likely to extend beyond the hull in a detectable fashion. As is the case with many Chinese platforms which often emerge shortly after U.S. ones with strikingly similar external design features, there are some ways in which the Nanchang does appear to mirror the Zumwalt, if even a little less stealthy.

The USS Zumwalt was several years ago reported by Naval Sea Systems Command as generating a radar return signal equivalent to a small fishing boat due to its stealthy configuration. Interestingly, the Nanchang’s hull is decidedly linear with an inwardly-angled hull deckhouse configuration. There are few separated large, pointy antenna masts on the Nanchang apart from one aligned straight up on top of the deckhouse and a small cluster on the back end.

At the same time, the Nanchang does appear to contain some features arguably less stealthy than the Zumwalt.  The USS Zumwalt aligns VLS (Vertical Launch Systems) along the periphery of the ship deck, in part to disperse placement and ensure operational functionality in the event that one part of the ship gets hit or damaged by enemy fire. Having the missile launches less “concentrated” may also bring the added advantage of lowering the heat signature emitted by the boat during attack operations. By contrast, a 2018 story in The Diplomat describes the Type 055 destroyers as having a “64 cell block of VLS.” Also, the back of the Nanchang looks a little “busier” than the USS Zumwalt; there does not appear to be a large, flat rectangular helo landing area on the Nanchang but rather a series of small antennas and mounted weapons and sensor systems on the back end.

The Chinese Government-backed Global Times reports that a total of eight Type 055s have been built, with two of them known to have entered service. As the first entry to the Type 055-class, the Nanchang entered service on January 12, 2020, and the second ship Lhasa in early 2021.

In addition, aggregated antennas in the back might localize the ship’s electromagnetic signature to some extent, enabling directional emissions and a single, concentrated signal area. This would preclude a need to emit multiple signals from different locations, potentially spreading out an electronic footprint. The deck-mounted guns on the Nanchang are less cylindrical and elongated than they are on the USS Zumwalt. In summary, it seems one could accurately characterize the appearance of the Nanchang as a bit of a hybrid blending between a stealthy USS Zumwalt and an armed Arleigh Burke-class destroyer.