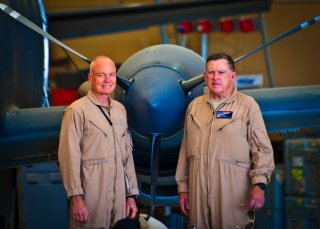 Here's What You Need to Remember: Linguists and analysts from the 361st Intelligence, Surveillance and Reconnaissance Group at Hurlburt Field in Florida flew on at least 31,180 combat sorties in 2012, supporting no fewer than 960 separate operations that resulted in Special Operations Forces detaining more than 3,980 people and killing at least 1,210, according to the history.

That’s one startling revelation in the official annual history for 2012 of the Air Force’s Intelligence, Surveillance and Reconnaissance Agency, a heavily-redacted copy of which the service released under the provisions of the Freedom of Information Act.

Linguists and analysts from the 361st Intelligence, Surveillance and Reconnaissance Group at Hurlburt Field in Florida flew on at least 31,180 combat sorties in 2012, supporting no fewer than 960 separate operations that resulted in Special Operations Forces detaining more than 3,980 people and killing at least 1,210, according to the history.

That single year’s kill tally probably makes the 361st one of the deadliest individual organizations in the entire U.S. military.

The 361st began as an aerial mapping unit during World War II. In 2008, the Air Force revived the unit as part of a massive expansion of intel units to support counter-terrorism operations and the wars in Iraq and Afghanistan.

Between 2008 and 2012, the Pentagon grew its fleet of spy planes and surveillance drones by 238 percent—until they accounted for half of all Air Force aircraft, according to the ISR Agency history. By 2012 the Defense Department was spending $67 billion a year on intelligence and surveillance.

Many intel flights require specialists to fly aboard the aircraft to quickly analyze the video the plane is shooting or translate the communications between enemy fighters that the aircraft’s receivers pick up.

The intelligence personnel can then pass the information they gather to troops on the ground. The info might include the locations and strength of enemy fighters.

The 361st—which oversees two smaller units of linguists and analysts, the 19th and 25th Intelligence Squadrons—provides the specialists for spy flights supporting Special Operations Forces. The group “is heavily tasked around the world,” the Air Force stated in a fact sheet.

Tech. Sgt. Brandi Fast from the 25th Intelligence Squadron was the Defense Department’s Language Professional of the Year in 2013. That year she deployed twice to Southwest Asia—Afghanistan, presumably—and helped during a mission to rescue 14 crew from a coalition helicopter that crashed.

Fast has a 16,000-word vocabulary in three languages, according to the Air Force.

Lt. Col. John Shirley, the 361st’s commander since April 2014, called his people “the best and brightest America and the Air Force has to offer.”

The planes the 361st’s specialists ride in could include special commando aircraft belonging to the Air Force or the Army. The Air Force’s few public releases concerning the 361st specifically mention U-28 and MC-12W spy planes, which are heavily-modified turboprop transports sporting sophisticated sensors.

The 361st’s intel personnel also support drone flights, presumably by sitting in the robot planes’ command trailers and analyzing video and communications intercepts the drones pipe in. In 2012, 19 percent of the 31,180 sorties the 361st’s people supported were drone flights, according to the ISR Agency history.

Based on the more than 1,200 people the 361st helped to kill in 2012, the group’s work is certainly deadly to America’s enemies. But the unit has also suffered casualties of its own.

On Feb. 18, 2012, a U-28 crashed in Djibouti in East Africa, killing Senior Airman Julian Scholten from the 25th Intelligence Squadron and the 361st’s Staff Sgt. Richard Dickson, who operated signals-intercepting gear, died in Afghanistan on April 27, 2013, when his MC-12W went down in hostile territory.