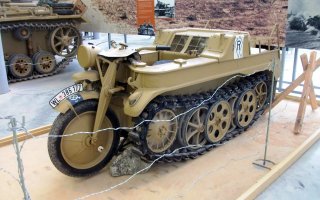 Here's What You Need to Know: Nazi Germany found a vehicle well-suited to the Eastern Front.

Germany likes small things. Be it the Wiesel tankette, a tiny two or three-man scout tank armed with a 20-millimeter autocannon main gun, or this odd motorcycle-tank hybrid, the Sd.Kfz. 2. The Special-purpose Vehicle, or Sonderkraftfahrzeug as it was known in German, was intended to be a compact heavy mover for the German Wehrmacht during the Second World War.

The Sd.Kfz. 2 was most used in Russia on the Eastern Front. In that intense conflict, the Sd.Kfz. 2 was used mostly as a support vehicle for towing or moving small amounts of troops or equipment in its small crew compartment or in a compact two-wheeled trailer.

It was also occasionally used to position airplanes on runways. Especially in the later stages of World War II, efforts were made by Germany to conserve as much jet fuel as possible, and using the Sd.Kfz. 2 to position jets was a conservation measure.

The Sd.Kfz. 2 was well-suited to the Eastern Front and the heavy muck that troops and vehicles had to wade through. In addition to a relatively low weight, the Sd.Kfz. 2 benefited from the large interleaving road wheels that rode on tracks, giving the Sd.Kfz. 2 low ground pressure. This neat video gives a good idea of just how capable the little tankette was off-road and is worth the watch.

Though low ground pressure was beneficial, the design suffered from mechanical complexity. The innermost road wheels were not quickly removable. In order to service them an outermost wheel would also have to be removed, hampering maintenance. In addition, the interleaving wheels could sometimes become filled with freezing mud and muck endemic to the austere Russian landscape and freeze, jamming the Sd.Kfz. 2’s tracks.

One of the more interesting Sd.Kfz. 2 variants was a demolition vehicle based on the Sd.Kfz. 2 chassis that could be driven both by remote control and by a driver. The Springer as it was called, lacked the motorcycle-like front wheel and handlebars of its Sd.Kfz. 2 parent and had a small one-man crew compartment that had additional armor protection.

To fulfill its demolition role, the Springer carried a 330 kilogram (or about 730-pound) explosive charge towards a target. Once near, the driver exited the little tankette and guided it via remote control towards its target. As the Springer would explode along with its payload, it could only be used once making it impractical for widespread use.

Postwar, an unknown number of Sd.Kfz. 2s were built as a cheaper tractor alternative. These low-cost vehicles were desperately needed to help alleviate the post-war food shortage in Germany that persisted until 1948.