Mike Tyson Is Back: Iron Mike Announces He Will Fight Lennox Lewis 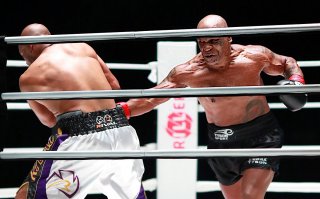 Get ready, boxing fans, as we have a potential blockbuster on our hands, albeit, both legends who could enter the ring are a little past their primes.

In November, Tyson came out of retirement to fight Roy Jones Jr. to a draw, although I would argue Iron Mike was the winner.

Tyson's performance was so spectacular, with a few big flashes of the punching power that made Tyson a legend,  that fans are eager to see him return to the ring.

Lewis, who battered Tyson in a 2002 knockout that was one for the ages, and a fight I will always remember as it was years in the making, now appears to be the goal.

Tyson made his announcement, oddly enough, in a surprise interview outside a restaurant, so it seems, at least for now, nothing is official just yet.

This supposed news is going to anger former champ Evander Holyfield, who had twice defeated Tyson in the mid-90s in what were truly epic bouts for the history books, and had hoped to be the next opponent.

Instead, Holyfield appears to be settling for a June 5 fight against Kevin McBride, who beat Tyson in 2005.