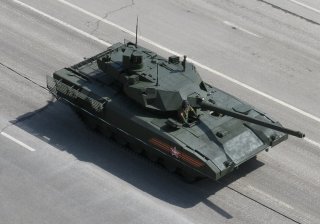 Here's What You Need To Remember: If the T-14 Armata was indeed taken out by insurgents – whether they simply "got lucky" or not – might not bode well for the advanced tank, especially given its costs.

Last month multiple media reports suggested that the Russian military's new T-14 Armata tank had been "battle-tested" in Syria. Russia Beyond cited Russian Industry and Trade Minister Denis Manturov, who had reportedly said in a mid-April TV interview on Rossiya-1, "Yes, that's correct. They (Armata tanks) were in Syria. The testing in combat conditions in Syria took all finer aspects into account."

Those "finer aspects" may have included the crews' survivability if other media accounts are to be believed that an Armata tank was destroyed during the operations.

According to the Russian media outlet Репортёр (Reporter), the Russian-made tanks took part in fighting with Syrian-rebels, described as "terrorists," in the providence of Latakia, where "allegedly three T-14s were hit from TOW-2B anti-tank system, and one Armata was completely destroyed."

There has been no actual footage or photos of the allegedly destroyed T-14 tanks, and as other media outlets have noted, "The jihadists and their allied militants release footage of their forces destroying tanks, especially on the battlefield… If the Armata was indeed destroyed, there would have been photos and videos of its destruction, especially because of its unique look and operation capabilities."

What could be telling about the alleged destruction is that some military analysts didn't think the tank could even be adequately tested in Syria. Dimtry Litovkin, editor-in-chief of Independent Military Review told Russia Beyond, "There's nothing for the Armata to do in Syria. The machine was tailored for battles with the most modern US and European tanks: the Abrams and the Leopard. But in Syria, who or what will it fight? Militants on pickup trucks or machine-gunners in foxholes?"

If the T-14 Armata was indeed taken out by insurgents – whether they simply "got lucky" or not – might not bode well for the advanced tank, especially given its costs, which are believed to have delayed delivery. Even as testing of the next-generation main battle tank (MBT) continues, the mass deliveries to the Russian Army will only begin next year.

"The high cost is also because the T-14 is going through a series of additional tests and upgrades ordered by the Ministry of Defense so that serial production can start next year under the signed contract," Manturov added.

The T-14 has been seen as an entirely new design for Russia, and it was first demonstrated during the May 2015 Victory Parade in Moscow. Unlike other Russian designs that had primarily followed an evolutionary path that was largely built upon preceding tank models, the T-14 began with a more simplistic design that could be traced back to the T-34. While much larger than traditional Russian tank designs, its three-man crew all sit in the hull as the turret is controlled remotely to increase crew survivability. As a result the T-90 has no gunner and instead uses an autoloader.

The tank is also fitted with the Afganit active protection system that is meant to detect incoming rockets and missiles, which can be shot down before hitting the tank. However, the reports from Syria may suggest that if an enemy can get close enough this tank is as vulnerable as any.

In addition to the alleged loss of a T-14 tank in Syria, three "additional" Armata tanks – along with three more T-15s, the armored troop carrier version of the Armata – were "destroyed" in a simulation conducted by the Invictus attack helicopters in a recent exercise-styled presentation.

The timing of the release of that new video along with the news that the actual tanks potentially came under fire just means the T-14 isn't have a good week! The fact the Moscow has postponed this week's planned 75th anniversary Victory Parade due to coronavirus – where the tanks likely would have been seen – hasn't helped matters.

This article first appeared eariler this year and is being republished due to reader interest.